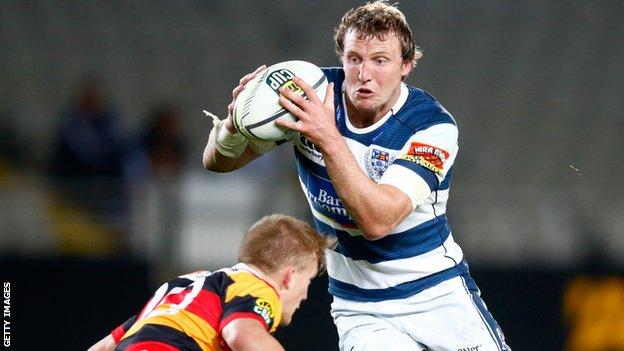 The 27-year-old New Zealander has played in every match for the ITM Cup side since making his debut in 2011.

Parkes has also played Super Rugby with Blues and Hurricanes in New Zealand, and Southern Kings in South Africa.

"It's great to be here, especially with the sun shining," Parkes told a media conference within hours of arriving in the UK after a 24-hour flight.

He added that the chance to play in the European Champions Cup was one of the main things that attracted him to play in Wales.

"It's an awesome competition with awesome crowds," he added.

Parkes has been registered for the competition and could be in Belfast with the Llanelli-based region for Saturday's Pool 3 encounter as a travelling reserve.

"Hadleigh will add some strength and depth to the backline," said Scarlets coach Wayne Pivac, who added that Parkes can also play in the back three.

Parkes has made 38 appearances for Auckland and was also part of their side which won the national sevens competition in 2011.

Pivac says Parkes' arrival will add experience and leadership behind the scrum.

"At 27 and a former captain of sides in New Zealand he brings a lot of experience that will be good for the young backline that we have," added Pivac.

"It's not only the playing positions that Hadleigh covers but the ... leadership he brings, which is where we're lacking so we're happy to have him on board.

"We're also looking at the fact that with Scotty Williams being in the Welsh squad with the World Cup coming up next year and with Regan (King) in the latter part of his career, it was a move to strengthen us in that midfield area when those experienced players are not available."