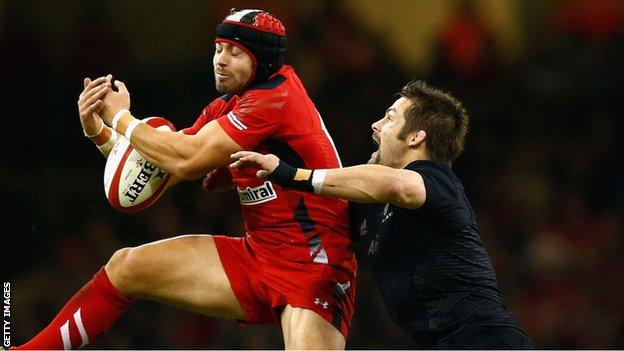 Wales produced a truly remarkable effort against New Zealand and seemed to be heading for at least another nail-biting finish against a southern hemisphere power in Cardiff.

But after New Zealand won by five-tries-to-one, the hosts were left wondering what else they could have done to take the All Blacks' scalp.

Wales led by a point with 11 minutes remaining and had fans on the edge of their seats.

But, it was not to be. Which players impressed and who had an evening to forget? Marks are out of 10.

Outstanding at some points and unusually made poor decisions at other moments in the game. A rock in defence until being caught out by Beauden Barrett's chip-and-chase try, albeit the All Black executed the move superbly.

But Halfpenny's decision to run into the New Zealand pack after his forwards had stolen possession on their own line proved a turning point in the game as the All Blacks scored after stealing the ball back from the Wales full-back.

Like the rest of the team, Cuthbert could not be faulted for effort. But he was part of a Welsh back three tormented by clever All Blacks cross-kicks as the game wore on. A stretched and tired defence suffered as a result, Cuthbert included.

Justified his recall after injury to the Wales midfield that gave their much-vaunted opponents Conrad Smith and Sonny Bill Williams major headaches for much of the game. Solid in defence, shrewd in attack

Racing Metro's Roberts has produced some of his best displays in a Wales jersey of late and earned the official Man-of-the-Match as he took the game to the All Blacks at every opportunity. On this form, Roberts will be a threat South Africa will want to close down next Saturday.

Like Cuthbert, North was shackled in attack and under pressure in defence. New Zealand had done their homework and Wales' wings were clipped.

The Ospreys' fly-half's ability to attack the gain-line and bring his centres and outside backs into play helped ensure Wales were still in the game with 12 minutes remaining. Biggar put in a hard-working, brave shift.

After the interception try that marred his performance against Australia, Webb proved his mental strength with a lively, accurate and telling display before a groin injury forced him off. Wales' snap and verve in attack seemed to disappear at the same time.

Had some problems with referee Wayne Barnes' interpretations at the scrums, but was part of a forward effort that had New Zealand on the ropes, albeit until the visitors took control in the dying minutes.

Occasional line-out wobbles were not all down to the Gloucester hooker, but he brought his considerable presence to bear following a week that began with controversy over an appearance for the English club. A few All Blacks will be wondering if Hibbard has some Pacific Islands genes after some of those tackles.

Lee's rise while Adam Jones remains unwanted by Wales continued against New Zealand's pack. The Scarlet can only get better and at 21 years of age, Lee seems destined to have a few more opportunities to help Wales end their losing streak against the All Blacks.

Competition for Wales' lock spots has never been stronger in the professional era with Ball's industry and footballing ability evident in the heat of battle against the All Blacks.

If Ball (see above) wants to become Wales' premier lock, he will have to become even better to overtake Ospreys star Jones in the pecking order. Jones was in peak form against New Zealand

If the mark was given for effort, Lydiate would rarely drop below a nine. But it was hard not to compare him, among others, with New Zealand's fully-rounded counterparts. Lydiate tackled and grafted with the best of them, but with ball in hand, Wales' go-to blind-side was less effective.

The ball came loose from Faletau's grip occasionally in tackles, as it had against Fiji seven days earlier. And good as he was, the Tongan-born player was shaded again by Keiran Read. That is nothing to be ashamed of.

The Wales captain is one of the best flankers of his generation, but he was up against arguably the greatest All Black of all time in Richie McCaw. Warburton won his 50th Wales cap and he may go on to win another 50 and must wonder how he and his team-mates can play so well for so long and still end up losing by 18 points. Sometimes sport is just too harsh.