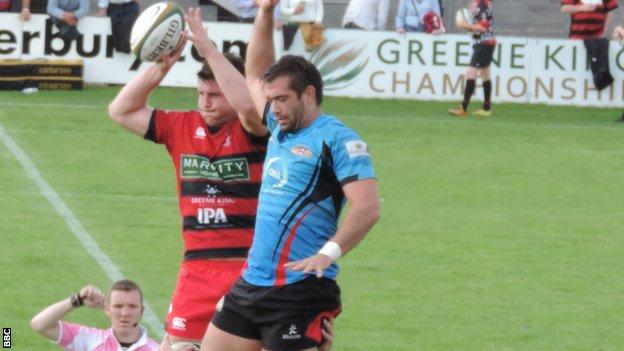 Jersey saw their hopes of a first ever victory over Moseley dashed at the death as the Birmingham-based side drew level with the final kick of the game.

Nick Haining's touchdown had earlier helped the islanders open up a 19-3 advantage.

But Neil Mason's try and two from winger Cheshire ensured the points were shared.

Jersey have never won on the opening day of a Championship campaign and have only narrowly avoided relegation in their first two seasons in the second tier of English rugby.

Heading into the game, the islanders had lost to Moseley in all of their four previous meetings and knew that less than six months ago they had been on the wrong end of a 39-8 loss to the Birmingham-based outfit.

Since then though Jersey head coach Harvey Biljon has brought in more than a dozen new faces, and nine of them were in his starting line-up, making their competitive debuts for the new-look side.

Amongst them was former Wasps full-back Tommy Bell, whose three successful first-half penalties saw the islanders lead 9-3 at the break.

Bell thought he had grabbed the opening try early in the second period but referee Tom Foley seemingly ruled, after discussion with the touch judge, that the ball had gone over the dead-ball line before being grounded.

The islanders did get their first try of the new league campaign not long after though, as flanker Haining forced his way over the line.

Bell's conversion opened up a commanding 19-3 advantage for the visitors but Argentine international hooker Martin Garcia-Veiga was sent to the sin-bin shortly after and that triggered the Moseley fight-back.

Back-rower Mason went over between the posts before Cheshire, on his league debut for the club, danced through a couple of missed Jersey tackles to close the gap further and set up a nervy end.

Bell's penalty re-established a seven-point lead for the Channel Islanders but there was still time for Cheshire's second right at the death to leave Thomas with the task of converting from the right for a dramatic draw.