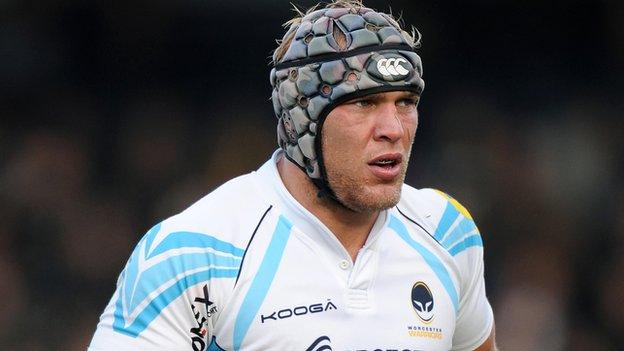 The 30-year-old lock was a target for Moseley as a teenager back in the late 1990s when the two clubs were still just about on a par commercially.

Since then, Worcester's star has continued to shine, as they have established themselves as Premiership regulars during Moseley's decline.

But Warriors' relegation reactivates the fixture at Championship level.

And former Harlequins and Northampton forward Percival realises that Worcester - just like big-spending Bristol, their last-gasp conquerors at Ashton Gate last Sunday - are now there to be shot at this season.

"Every week is going to be a scrap," he told BBC Sport, ahead of Moseley's visit to Sixways.

"If I was at any other club than Worcester, I'd be thinking 'I want to smash them, I want to prove a point, maybe I can play for Worcester one day'.

"When I was 15, I was asked to come for a trial at Worcester, I also trialled at Moseley, Stourbridge to see which one was the better set-up.

"It seems weird now that I was comparing the two with Worcester but, back in the day, they were big clubs.

"Now they have players who may have not played here before. To come and run out at Sixways will be quite an experience.

"For them it's a big cherry on the cake that you want to go and take off. And, if I was at Moseley, I'd be raring to go and looking forward to smashing into a few tackles.

"It's up to us to stay humble and respectful and not get arrogant. Maybe last week will keep us on our toes and make us realise that."

Worcester's opening-weekend added-time defeat at Bristol - their expected rivals for promotion - was painful for Percival and the rest of Dean Ryan's reshaped side. But the big second row forward insists that there will be no more excuses.

"There's no point looking back and moaning about things," said Percival. "We need to get rid of that monkey off the back.

"There were moments in the game last week when we should have finished them off and we didn't take them.

"We now have to keep looking forward. The reason I came back to Worcester was to be part of something and make this club successful."

In the week when they prepare to open their latest Academy centre in Moseley's old heartland in Birmingham, Worcester will be taking on Mose for the first time since the Warriors' promotion-winning 2010-11 season.

Boss Ryan is equally respectful of the once-famous Birmingham club's past and is also under no illusions about the size of task facing Worcester this weekend.

"You go back and Moseley were one of the teams who supported England," Ryan told BBC Sport. "But professionalism has changed the whole rugby landscape.

"Moseley have done well at different times to hang on to their identity when other clubs have disappeared. That's testament to the people who have run the club.

"But they've got Kevin Maggs as their coach now. His clubs will always fight and they will be looking to take bigger scalps."

GJ van Velze - unavailable last weekend - comes in to captain the Warriors on his delayed debut following his summer move from Northampton.

He is one of six changes to last Sunday's starting XV at Bristol - and there are also first league starts for young lock Christian Scotland-Williamson, hooker Niall Annett and scrum-half Charlie Mulchrone, with England full-back Chris Pennell rested.