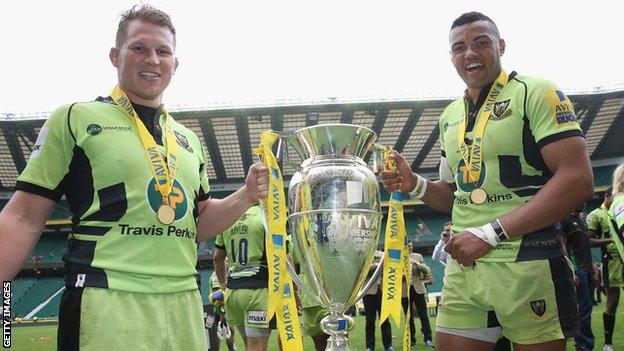 Northampton will begin the defence of their Premiership title at home to Gloucester on Friday, 5 September.

London Irish take on Harlequins in the other half of the London Double Header.

Last season's Premiership finalists have to wait until 22 November to face each other again, when they will meet at Allianz Park, before the return fixture on 25 April, which will be at Stadium MK.

Organisers of the 2015 Rugby World Cup requested the fixture switch to Milton Keynes to test out a large crowd at the venue, which will host three group games during the competition.

Saints have played at the home of football team MK Dons on three previous occasions, including a Heineken Cup pool game against Munster in 2012 in front of a record 22,220 attendance.

East Midlands rivals Saints and Tigers play at Welford Road in the final game of the regular season.

Their first meeting is on 20 December, the same day as the first West Country derby of the season between Bath and Gloucester at Kingsholm.

London Welsh, who made an immediate return to the Premiership by winning the Championship play-offs, avoid any of last season's top four in the opening four rounds by following up the visit of Exeter with trips to Bath and Sale, and a home fixture against Gloucester.

NB All fixtures and kick-off times are subject to change. The BBC is not responsible for any changes that may be made.