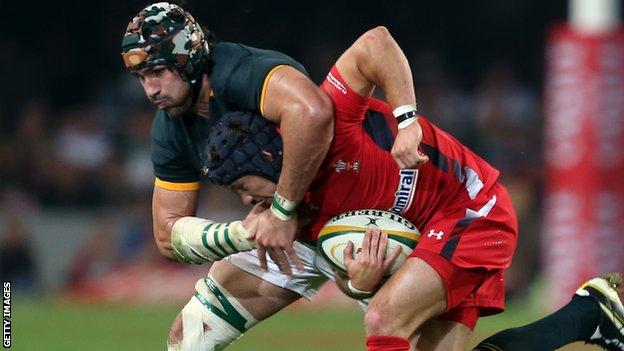 Wales forwards coach Robin McBryde said no-one has the "God-given right" to play in the second Test against South Africa on Saturday in Nelspruit.

Boss Warren Gatland admitted Wales were dominated physically in the first half of their 38-16 first-Test defeat.

"It's not a God-given right that you're given the opportunity and the honour to represent your country," said the former Wales hooker.

Scrum-half Gareth Davies and utility back Matthew Morgan impressed after making their debuts off the bench.

And veteran tight-head prop Adam Jones, playing in his 100th Test, was replaced in the 31st minute by Samson Lee, 21, who was making his fourth appearance.

Wales face the Springboks in the second Test in Nelspruit on Saturday.

McBryde added: "We can't shy away from making tough calls, making tough decisions. We've got to put the team first."

The former Llanelli and British and Irish Lions forward also said he will meet International Rugby Board (IRB) referees' chief Joel Jutge this week to get clarification about the scrums.

"It's just the specifics really of the technical aspects of the scrum with regards to the couple of times that we've been penalised. It's just us being able to make sure we're seeing the same things as the referee," he added.

"There's a perception out there, unfortunately, that I think we're battling against... I think it's one of our strengths in the scrum.

"And at the moment, perhaps we're compromising ourselves a little bit by falling on the wrong side of these decisions."