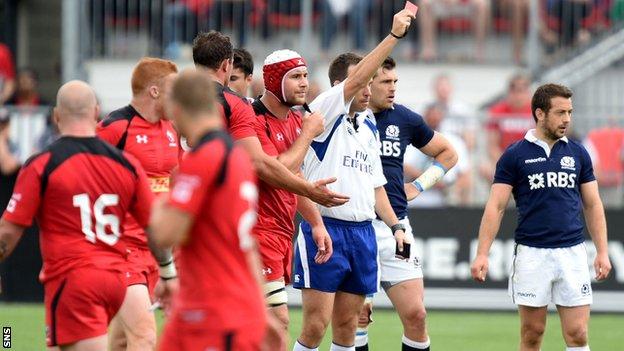 International rugby is a game of small margins and Scotland's win over Canada could have gone either way.

The main talking point will be the decision by referee Mike Fraser to show a red card to Canadian back-row Jebb Sinclair for 'leading with the elbow' with five minutes left to play.

Being reduced to 14 men was bad enough but in the process Canada lost the penalty in front of the posts which, if successfully converted, would have put them ahead.

For me, it wasn't even a penalty against Sinclair and decisions like these set a dangerous precedent.

I've seen Clermont winger Napoli Nalaga yellow-carded for 'leading with the knee' when carrying the ball. Could Sean Lamont have been put to the television match official for the lead up to the Taylor Paris head knock? In my opinion that would have been absurd but a referee has to be consistent.

It's two from two with this group of players. A winning habit is being created which shouldn't be underestimated

I suggested last week that Scotland had to place a heavy emphasis on kick-off receipt and the ensuing exit strategy out of their half.

Word from within the camp was that it had been a focus of training leading up to the second Test of the tour, it's a big part of the game. "Points on the board only count once you get out of your half," an old school teacher used to say.

Unfortunately, it was an area that Scotland struggled in; over-complicating sometimes, not protecting the catcher other times but also - credit to the Canadians - mistakes were made on the back of an extremely effective high and long drop out by Ciaran Hearn and a persistent, high-intensity chase.

Too often Scotland handed over possession or field position straight after scoring points. For Scotland to progress they need to decide what works for them - who kicks, when they kick and where they kick - and then execute.

Execution was an issue throughout the game. You can do all the attacking shape work you want during the week, but if you cannot execute the basic skills to a high enough level then there is almost no point.

Scotland seemed to want to test the Canadian wide defence but, with respect to Lamont who carried very effectively and Sean Maitland, they are not ball players and as second receivers you would want Stuart Hogg and Peter Horne stepping up.

If you took an aerial snapshot of the wide attack shape it would look good but allocation of the right player to the right role was imprecise.

Defensively, again, if you take the aerial snapshot the structure was not too bad but consistent line speed and tackle completion were not where they should have been.

Scotland defence coach Matt Taylor, who has done such a great job with Glasgow Warriors, only had Moray Low who he's regularly worked with. He will certainly look for improvement when some more familiar Warriors faces appear for the second half of the tour.

Canada were exciting to watch. They showed the benefits of skill development on the IRB Sevens World Series, with five of their starting team involved in their core sevens squad this year.

There was unpredictability, ambition and no shortage of skill. Jeff Hassler's try was an example of execution more associated with that of the All Blacks.

Blair Cowan made a very positive impact when he replaced Alasdair Strokosch for the Scots. He was aggressive in the contact and quick over ball, producing a turnover with his first involvement and was a constant nuisance at the break down.

There is no doubt at all in my mind that Finn Russell has the necessary attributes to wear the Scotland number 10 jersey for many years but he is in a position where he is learning his trade in the international arena and mistakes will be made, as they were in Toronto.

Former Scotland head coach Frank Hadden said that he believed 50 professional games were generally required before launching players into the international environment. Russell has barely a third of that with Glasgow so his learning curve will have to accelerate quickly to consistently meet the demands of Test rugby.

So it's two from two with this group of players. A winning habit is being created, which shouldn't be underestimated. There will be plenty on Vern Cotter's mind though with basic skill execution being at the forefront of his thoughts.