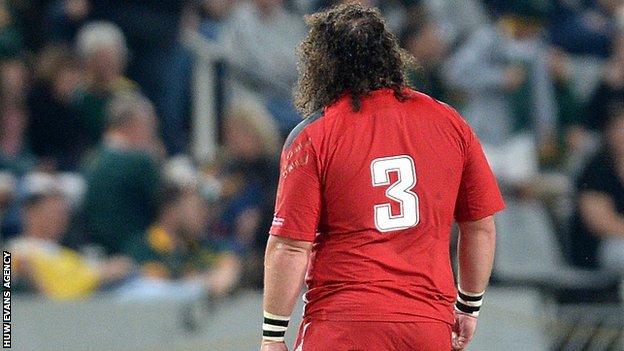 Wales coach Warren Gatland says Adam Jones was not injured when he was replaced in the first half of their 38-16 defeat by South Africa in Durban.

Jones was making his 100th Test appearance and made way for 21-year-old Samson Lee, who was winning his fourth cap.

The New Zealander also said South Africa "physically dominated us in the first half".

Jones has targeted making 100 Wales appearances with his Test ton currently made up of 95 for his country and five more for the British and Irish Lions.

But being taken off in the 31st minute against the Springboks was a reminder of his treatment by another New Zealander, former Wales coach Steve Hansen.

Wales were 21-6 down when the Ospreys prop, who was praised ahead of the game by Gatland, went off in favour of Scarlets rival Lee.

The visitors trailed 28-6 at the break in the five-tries-to-one loss with 14 first-half points conceded while centre Jamie Roberts was in the sin-bin.

Gatland said Roberts' temporary dismissal was justified after the British and Irish Lions centre tackled outstanding Willie le Roux while the home full-back was in the air.

He also admitted the Springboks' intensity took its toll on his side, who need to improve their defence ahead of next Saturday's second Test in Nelspruit.

"All credit to South Africa, they just physically dominated us in the first half and won the collisions," said Gatland.

"And we just struggled with the pace and intensity of that first half.

"It probably didn't help having Jamie Roberts in the bin and we conceded 14 points.

"And the game had got away from us by half time."

The half-time message to Wales' players was to be "more aggressive off the line defensively".

Gatland added: "It was a much better performance in the second half.

"Hopefully that will be good for us next week.

"We were poor defensively on the short side. I thought [Willie] le Roux was a pest basically, in that and he was outstanding and caused us a lot of trouble.

"[Le Roux executed] a couple of chips over the top which we didn't handle, which is disappointing.

"So those are the areas that we need to improve on."

Gatland was happy his side was able to produce some chances, but added: "Unfortunately there was two or three opportunities we didn't finish off."

He expects Wales to be a lot better in the second Test.

"And we need to be better," said Gatland.

"There was nothing unusual about the way that they played... and I'm sure we'll get more of the same next week."