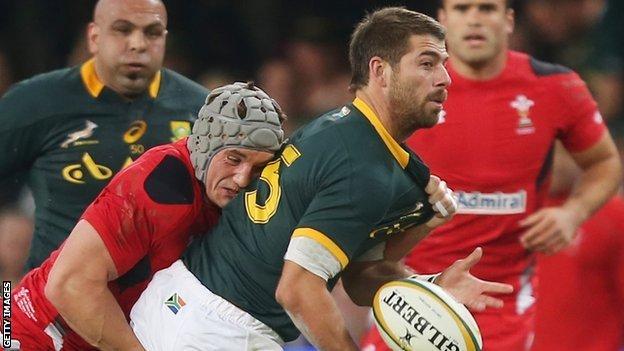 South Africa made light work of brushing aside a Wales side whose coach Warren Gatland had believed were "good enough to win".

The hosts ran in five tries in a one-sided display in Durban.

Home fly-half Morne Steyn kicked all his goals - five conversions and a penalty - and coach Heyneke Meyer will have been pleased that a team dubbed 'Dad's Army' by some sections of the South African media were more than a match for a side that started with 10 British and Irish Lions.

The Springboks were particularly potent in their driving forward play and won the back-row battle at the breakdown hands down.

Wales may have suffered from the absence of regular captain and open-side Sam Warburton and his rival Justin Tipuric.

But the visitors' defence was often slow to react and they paid the price as South Africa's record against Wales was extended to 26 wins, one defeat and a draw.

Gatland was confident that Wales had the players to beat the Springboks for the first time on South African soil.

And Biggar underlined that belief with a neat third-minute drop-goal after the visitors retained early possession.

But some of the reasons Wales were seeking only a second win over the Springboks in 28 attempts spanning 107 years became apparent as the hosts built a healthy lead.

Robust driving play from the home pack paved the way for outstanding full-back Le Roux to chip ahead and Habana won the foot race to touch down, with Steyn converting from near the touchline.

Wales centre Jamie Roberts was then sin-binned for tackling Le Roux in the air, and the hosts took full advantage, scoring two tries in his absence as the driving line-out play for which they are renowned paid dividends.

Steyn again converted and, after a brief period of Welsh pressure that ended with Biggar's second drop-goal, Habana got his second.

And, as the opening period drew to a close, Le Roux's sensational display was rewarded with a clever solo try.

His chip over Wales' defence bounced awkwardly for opposite number Liam Williams, and Le Roux gathered before slipping out of George North's challenge.

Biggar then slotted his first penalty attempt to keep up his 100% record with the boot and leave Wales trailing 28-9 at the break.

The gap was extended soon after the restart as Steyn sent over his first penalty shot, and debutant Hendricks went over for the hosts' fifth try before the hour was up.

As the final quarter beckoned, two old stagers who have suffered serious illnesses entered the fray.

Former Wales captain Matthew Rees replaced Ken Owens at hooker having had successful treatment for testicular cancer this season, and Springboks flanker Schalk Burger, 31, came on after his recovery from bacterial meningitis.

If Wales had been outplayed, it was two moments of individual brilliance from the tourists that lit up the closing stages.

Replacement scrum-half Gareth Davies, making his debut, made a telling 60-metre break and took what looked a scoring return pass from Biggar only for it to be deemed forward.

And Cuthbert then broke free from his own 22m line, cutting past Habana and outpacing Le Roux to touch down, with Biggar's replacement, James Hook, adding the conversion.