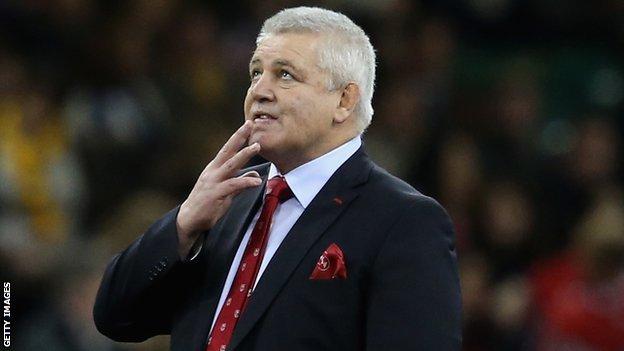 Wales have beaten the Springboks only once - a 29-19 win at Cardiff's Millennium Stadium in 1999.

But New Zealander Gatland said: "If we can compete with South Africa physically and keep our patience, I think we've got a good chance.

"We're going out there with the belief and confidence that we're good enough."

But it was his success in guiding the 2013 British and Irish Lions to a 2-1 Test series win over Australia down under that led to Gatland being awarded an OBE in the Queen's Birthday Honours list.

And even though Welsh fortunes have improved since Gatland took over in December 2007, their only win against a major southern hemisphere power under him came in 2008 against Australia.

Six defeats by South Africa during Gatland's reign underline the nature of the hurdle facing his tourists ahead of the first of two Tests.

Wales prepared for the tour with a trial that allowed uncapped backs Matthew Morgan and Gareth Davies to stake claims.

Morgan, usually a fly-half, is a versatile option on the visitors' bench, while Davies hopes to challenge vastly experienced Mike Phillips if he is called into action on Saturday.

But the rookies are outnumbered by a Wales match squad that includes 13 British and Irish Lions, 10 of whom start.

Gatland said: "We need to get ourselves in the arm wrestle and we need to be patient as well… and just be accurate. It's a reasonably simple game.

"It's a pretty experienced team. We know the challenge for us is to match South Africa physically.

"They are always strong at maul time and driving line-outs - that's going to be an issue for us - and the physicality they bring to the game.

"Even though there's a few key [South African] players injured in the midfield, Petersen - even though he's played a bit at 13, maybe not a lot this season - is pretty experienced."

Phillips is encouraged by the "close" results between the teams since Wales were last on tour there in 2008.

Over five encounters from November 2008 until November 2013, the aggregate score has been 124-111 in South Africa's favour.

The narrowest of those encounters opened the 2011 World Cup in New Zealand for the teams, a game the Springboks won 17-16.

Racing Metro's Phillips said: "Everyone knows their forwards are massive and they punch it up and they control things at nine and 10.

"And they've got a back three that can cut holes - they're complete, really.

"And it's been the same for years... hopefully we can stand up to them and do a job and we're coming here to throw everything at them and who knows?

"The last four or five games, there's been a score, maybe a couple of points [between us] and they've been very, very close.

"But they've had that edge on us and we've got to try and get over that."