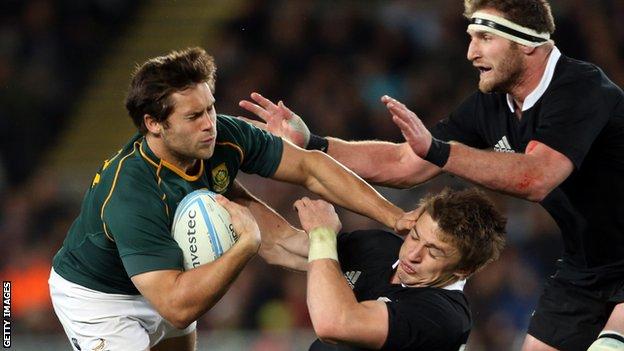 South Africa have made three changes to the side that beat a World XV 47-13 for Saturday's first Test against Wales in Durban.

Centre Jan Serfontein, 21, starts in place of Frans Steyn, who withdrew from the Springbok squad on Tuesday.

Scrum-half Fourie du Preez starts in place of Ulster's Ruan Pienaar, who drops to the bench.

Victor Matfield, will captain the Springboks for the 18th time in a Test, equalling John Smit's record of 111 Tests.

Wales head coach Warren Gatland will name his side on Thursday.

George North should be available despite missing the win over Eastern Province Kings 34-12 in Wales' opening match of the tour.

Wing Cornal Hendricks is set to line up opposite North for his first Test start, while his Cheetahs team-mate - the uncapped lock Lood de Jager - is on the bench instead of Flip van der Merwe.

South Africa coach Heyneke Meyer said he was impressed by Wales' start to the tour in Port Elizabeth and expects them to provide a stern challenge.

"Wales have an experienced coaching team and they were the Six Nations champions in 2012 and 2013, as well as the back-bone of the British and Irish Lions team which beat Australia last year, so this will be a massive challenge in our first Test of the season," Meyer said.

"Although we got our season off to a good start against the World XV last weekend, there were a few areas we were not satisfied with and which we worked hard on this week.

"We will have to be at our best on Saturday and we want to make our supporters proud."

Meyer says Hendricks and De Jager deserve their places after impressing this season for the Cheetahs but, despite their lack of experience, the head coach is confident they will deliver in Durban.

"I know they will do well. Cornal [Hendricks] performed exceptionally well in his first start for South Africa against the World XV last weekend and really made the most of his opportunity," Meyer added.

"Lood [De Jager] has everything expected from a modern lock - not only is he big and powerful, but he likes the physical stuff and is very skilful as well.

"I also planned on giving Jan [Serfontein] an opportunity this month. He was first selected when he was 20 last year and it's always been our plan to groom him for a long Springbok career.

"He's been playing well for the Vodacom Bulls lately and his first start for the Springboks is well-deserved after making nine appearances from the bench in 2013.

"Jan and JP Pietersen will face a very experienced midfield combination on Saturday, but they have played against the best in Vodacom Super Rugby and know what is expected of them."