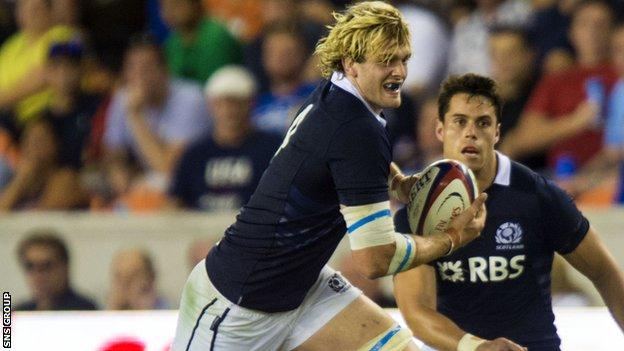 Second row Richie Gray expects Scotland to up their game in the second Test under new head coach Vern Cotter.

The New Zealander began his reign with a 24-6 win over USA and now the Scots are preparing to take on Canada.

"Last week was his first time with the guys, so he wasn't giving too much, just a bit of direction," said Gray.

"This week, it has been more hands-on, especially with the forwards, so we are being moulded in the way he wants to train and play."

Tim Visser and Stuart Hogg touched down in searing Texas temperatures and the visitors also scored a penalty try against the Eagles.

Castres lock Gray was a key figure in a dominant pack, but knows Cotter is looking for more.

"He was pleased with some areas of the game at the weekend, as a team we were happy with the scrum and the defence; being able to shut out the opposition - no tries," he explained to BBC Scotland.

"But we still have to make improvements at line-out time and bring more physicality to our game. That's been a big focus this week."

Thanks to his time at former club Glasgow and in France, Gray is familiar with some of Saturday's opponents, with his opposite number Jamie Cudmore impressing for Clermont Auvergne, the side Cotter has just left.

"It will be a step up," added Gray. "We know a few players from back in Europe; Jamie Cudmore and DTH (van der Merwe) and Taylor Paris, who were both at Glasgow.

"They have some very good players and they are a team that likes to play rugby. They like to throw the ball about.

"It will be a tough challenge so we really have to be on the mark.

"We would love to score a few points but the main thing is winning and finding a way to do that."