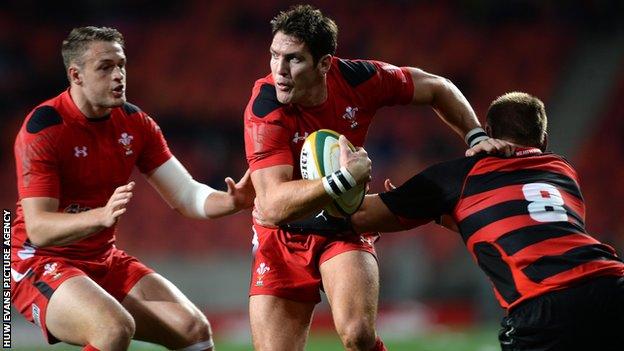 Wales warmed up for the first Test against South Africa with a five-try victory over Eastern Province Kings.

Tries from Josh Turnbull and Cory Allen, with two conversions and a penalty from James Hook, gave Wales a 17-0 interval lead.

The game at Port Elizabeth's Nelson Mandela Bay Stadium had been arranged by the Wales management as a warm-up match ahead of Tests against the Springboks on successive Saturdays.

Head coach Warren Gatland will have be buoyed by a good victory and several encouraging performances from a side which included debutants Matthew Morgan, Steven Shingler and Jordan Williams.

George North was not part of the matchday squad with the Northampton Saints wing left at the team hotel as a precaution due to a slight virus which is not expected to keep him out of Saturday's first Test in Durban.

Wales, captained by Dan Lydiate, started well and they were only denied a quick try when Cardiff Blues centre Allen was guilty of a double movement.

The tourists did not have to wait long for their opening try with a well-constructed driving maul rumbled fully 15 metres for Turnbull to dot down before Hook added the extras.

Allen was not to be denied and he scored Wales' second try when he benefited from good work by Hook and Baker to cross by the posts which Hook converted.

The Kings, playing their first competitive game ahead of their Currie Cup campaign rarely threatened but an extended period of pressure in the Welsh 22 resulted in prop Rhodri Jones sin-binned.

Jones was yellow carded for ill-discipline as he failed to retreat at a Kings penalty, which was sent to the corner.

But Kings' failings at the line out meant they were unable to take advantage, and copious passing errors made it difficult for them to get into the game during the first half.

Wing Scott van Breda did cross over in the corner, but the try was not given following a forward pass from Shane Gates while Kevin Luiters was denied by a tackle by Williams.

Gloucester-bound Hook added a penalty on the stroke of half-time to extend Wales' their lead before he scored a third try early in the second half.

Hook capitalised on a lovely chip from Steven Shingler to score a try before adding his third conversion of the evening.

Cuthbert finished off a flowing move sparked by a Williams break seconds later for Wales' fourth try which Hook failed to convert.

Gareth Davies impressed after coming on as a replacement and he was denied a try after the referee correctly ruled a forward pass by Aaron Shingler.

But a fantastic run on the wing after Dan Baker's great pass saw the Scarlets player run in Wales' fifth try although narrowly missed with the conversion.

Matthew Morgan continued to get into good positions out wide and join the play, receiving the ball and pushing Wales forward with some solid runs.

The Kings pressed Wales late on and replacement Kerrod managed to find a consolation try for the hosts converted by George Whitehead, but in truth they were never in danger of beating a Wales side that will take pride in their five-try victory.