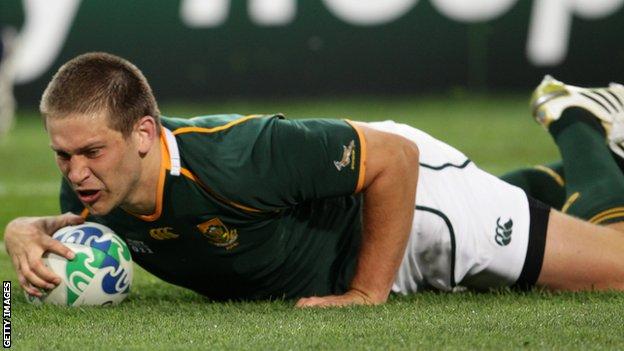 South Africa's versatile back Frans Steyn has pulled out of the Springbok squad to face Wales to think about his international future.

Steyn was released at his own request on Tuesday and will not feature in Saturday's match against Wales in Durban.

He told coaching staff that he wanted time to consider his international future.

Steyn said his relationship with Boks coaches and teammates is "very good".

"The environment in the Springbok squad is fantastic and I would like to state categorically that my relationship with [head coach] Heyneke Meyer, the rest of the management and my team-mates is very good," said Steyn, who has 53 international caps.

Steyn, who is expected to move to a team in Japan at the end of Vodacom Super Rugby Series, indicated he would be available for his club side, Cell C Sharks, at the end of the June internationals.

"I have spoken at length to Frans and we are happy to accede to his request," South African Rugby Union chief executive Jurie Roux said.

"He has asked for some time to consider his international playing future and we must respect that. Let me make it clear that he has not retired from international rugby, but he has requested a break from it.

"This is not an ideal situation, but, in other instances, sudden player absences through injury are not uncommon and I'm sure Heyneke and the selectors will adapt to his unavailability. Frans is now out of the squad and team management will respect his wish for privacy by not speculating on his decision or his likely return."