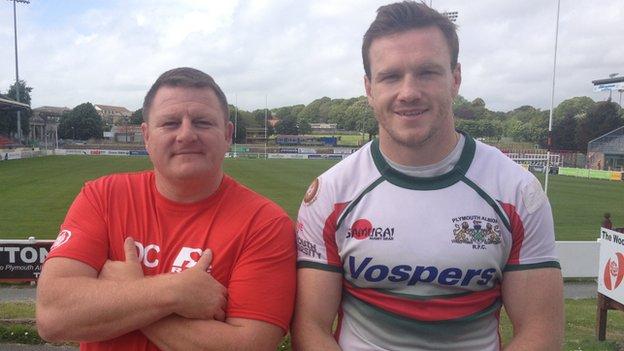 Grieve, 27, becomes the 10th new forward to join Albion this summer after after nine years.

Crompton, 41, joins on a part-time basis after a stint at London Welsh.

"At the time Iain was shocked that Bristol weren't going to retain him," head coach James Shanahan told BBC Sport.

"I was shocked that he was available to be honest as he captained Bristol for three years and played 127 games but wasn't in their plans.

"Straight away I spoke to him, we had a good conversation, I made an offer and I was delighted when he said yes."

Shanahan said his decision to bring in Crompton was a 'no-brainer':

"What he's done at London Welsh, helping them get promoted, he really upped them in that final 10-week period.

"When I knew he was available, it was a no brainer for me."

As for Grieve, he is looking forward to being part of a team that has garnered a reputation for playing attacking rugby under James Shanahan.

"He wanted a forward pack that will set some dominance and defend very well.

"These were things that highlighted why I wanted to come here because I do like running with the ball - but I do like getting my face dirty and the odd little bump and bruise."