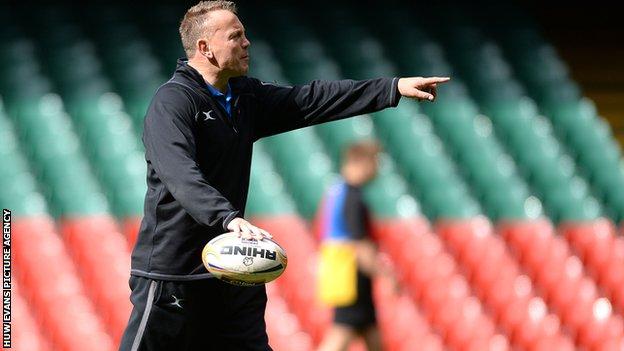 Jones, who arrived at Rodney Parade in the summer of 2013 as an assistant coach, has agreed a three-year deal.

Jones said: "To be back in Gwent and coaching the Dragons is a big honour for me."

Prior to the Russia job, Jones had a seven-year spell at Sale Sharks.

"For the last seven or eight years, we have been tagged as the fourth Welsh region and the coaching post here is seen by many as a tough job," said Jones.

"But I relish the challenge and feel that it is a great honour for me to be coaching Gwent as I am born and bred in the region.

"It will be a hard process but the future is positive, especially with 11 Dragons named in the Wales Under-20s squad, our fans should have plenty to cheer about in the near future."

Lyn Jones, director of rugby at the Dragons, said: "It was great to have Kingsley here to help out at Rodney Parade last season, but having him here full time will be beneficial to both the players and the coaching staff.

"This is a major coup for the Dragons and I look forward to working with Kingsley once again."