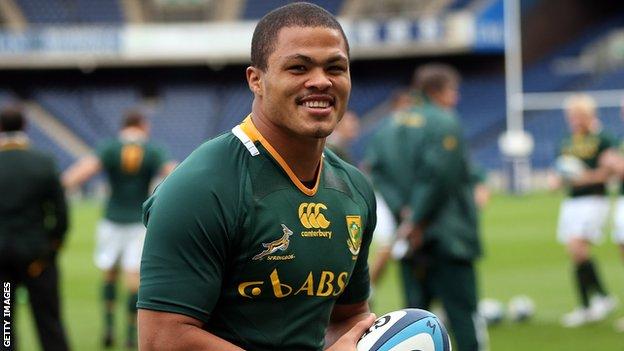 South Africa will be without Juan de Jongh and Marnitz Boshoff for Saturday's first Test against Wales in Durban because of illness and injury.

Centre De Jongh, 26, was admitted to a Durban hospital on Sunday with a severe chest infection and is unlikely to be discharged before Wednesday.

Boshoff, 25, is out with a grade one ankle sprain suffered during training.

The South Africa medical team are hopeful the fly-half will resume training later this week.

South Africa have called three-times-capped prop Trevor Nyakane up to their squad ahead of two Tests against Wales.

Coach Heyneke Meyer has brought back Nyakane, 25, after their scrummaging problems in Saturday's 47-13 win over a World XV.

Meyer has also allowed lock Flip van der Merwe to be at his brother's wedding next weekend instead of being available to play Wales in Durban.

"Trevor is a player who we identified last year already as someone who can play at the highest level," said Meyer.

"He's currently not the first-choice in his position for the Cheetahs and we're thankful that they granted us this opportunity to pull Trevor into the squad.

"As the Cheetahs are on a break from Vodacom Super Rugby at the moment, we want to use this opportunity to work with Trevor, keep him up to date with our playing structures and, most importantly, spend time on his conditioning and other aspects considering the Springbok ethos."

Van der Merwe will return to the hosts squad ahead of the second Test against Wales, in Nelspruit on 21 June.

Wales warm up for the first Test with a clash against Eastern Province Kings in Port Elizabeth on Tuesday.

Flanker Dan Lydiate leads Wales with coach Warren Gatland saying his place in the squad for the first Test against South Africa may be at risk.