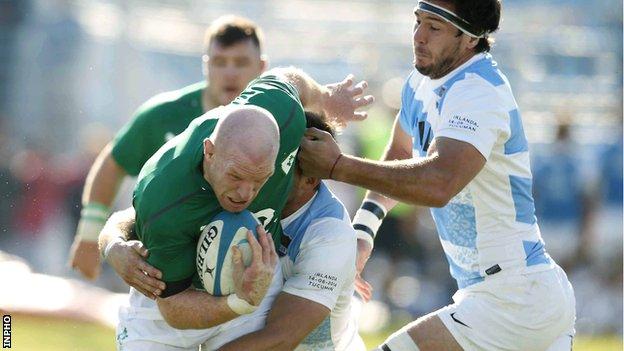 Ireland secured a first series win in Argentina thanks to a 23-17 victory over the Pumas in Tucuman.

Jonathan Sexton kicked three penalties for the Irish but an excellent try from Joaquin Tuculet helped the hosts to a 10-9 advantage at half-time.

Tries from Simon Zebo and Ian Madigan put Ireland in control before Lucas Gonzalez Amorosino went over in the dying seconds for a consolation try.

Ireland win the series 2-0 after last weekend's 29-17 victory in Resistencia.

The tourists seized early control at a sun-kissed Estadio Jose Fierro, and Sexton registered his opening penalty after five minutes.

Argentina prop Matias Cortese was sin-binned for a chop tackle four minutes later, and Sexton slotted over the resulting penalty.

Ireland wing Andrew Trimble then joined Cortese in the bin when he tackled Manuel Montero off the ball in rare foray forward from the hosts.

Nicolas Sanchez halved the gap with a penalty, but the Irish were soon back down the other end with their dominant scrum pressing.

However, the Pumas scored the opening try with a brilliant 23rd-minute move, Sanchez breaking from close to his own line before releasing Amorosino and Tuculet darting over when the ball was moved wide.

Sanchez added the extras before Sexton fired over a penalty to leave just a point between the sides at the break.

Sexton missed a penalty in a scrappy start to the second half but a precision move gave Ireland the lead through Zebo's try on 51 minutes.

Eoin Reddan took possession from a maul and his inside pass created the room for the Munster wing to storm through to the line, with Sexton adding the conversion.

Ireland went close to another try six minutes later when Ulster centre Darren Cave was held up inches from the line after good work from the impressive Rhys Ruddock.

Madigan dragged the penalty wide, but the replacement made amends in style on 73 minutes - the Leinster fly-half spotting a gap and darting over before converting his own try.

Amorosino ran through for an Argentina try in the last minute, and Iglesias Valdez's conversion was the final action of the game.