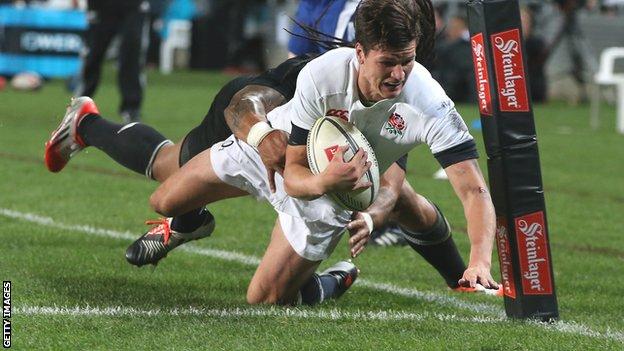 Fourth-choice fly-half Freddie Burns said he felt he had a massive point to prove ahead of his return to the England team on Saturday.

Burns had a poor season with Gloucester but had a fine game, including landing four penalties, as England lost 20-15 to world champions New Zealand.

"First and foremost it's gutting as a team to be pipped like we were at the end," said the 24-year-old.

"Personally I was happy how I went. Hopefully I silenced a few critics."

Leicester-bound Burns, only playing because of the unavailability of Owen Farrell, George Ford and Stephen Myler, kicked England into a 9-3 and then 12-9 lead.

But the visitors were unable to hold on as Conrad Smith's late try gave the All Blacks a 1-0 lead in the three-Test series.

"There are still areas of the game I want to get better at and I know there are areas out there I can definitely improve on," said Burns.

"But for me and the team it's a big step forward and a big confidence boost going into the last two Tests.

"Talking to the media this week I felt there were a few question marks raised but I've never doubted myself, especially in this environment.

"Hopefully I've proved I can manage a game and kick my goals in the toughest rugby arena in the world."

Burns is expected to be replaced by Saracens 10 Farrell for Saturday's second Test in Dunedin, but he was keen to find the positives.

"The one thing about this group is we're building towards the World Cup. We're all about the team and the squad," Burns insisted.

"Most of the boys that played really put down a marker and hopefully gave the coaches some tough decisions to make.

"It shows England's got great depth, 15 months out from a World Cup."