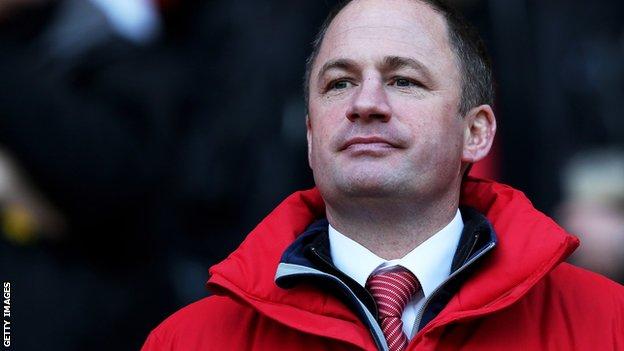 Ulster's director of rugby David Humphreys is to quit his position to take up a similar role at Gloucester.

The 42-year-old's surprise move sees him replace Nigel Davies, who was dismissed by Gloucester last month.

The Cherry and Whites endured a disappointing season, finishing ninth in the Premiership table.

"We put in place a really thorough search process and we had dozens and dozens of conversations with very credible candidates, but David really stood out.

"His recruitment and retention of players at Ulster was second to none in Europe.

"He's always been very successful and has great morals and humility. I think his skill set will fit perfectly well with the people we've got at the club."

But while Gloucester are delighted at capturing Humphreys, Ulster have been left stunned by the speed of the former Ireland fly-half's departure from Ravenhill.

Ulster chief executive Shane Logan said he always knew that a day would come when Humphreys would move from the club for career reasons.

But he was left "taken aback" when Humphreys told him two days ago that he would be moving to the Premiership club.

Asked whether any attempts had been made to make Humphreys change his mind, Logan replied:"I don't think we tried to do anything.

"I think David has been consistent over the years that he wants his career to advance," added the Ulster chief executive.

"We've had a joint career plan. Part of that has been to advance excellent levels of success and a really good legacy here.

"We wouldn't stand in David's way. We've always been clear that David wanted to move his career on.

"The surprising part at the end, and possibly the disappointing part, is the speed at which it happened."

Despite his disappointment, Logan wishes Humphreys well for the future and said that his good personal relationship with his former director of rugby would remain.

Ex-Ireland fly-half Humphreys was appointed to the Ulster position after retiring as a player in 2008.

His roles included player recruitment and Ulster made a number of major signings during his stint.

The arrival of international stars helped revive Ulster's European fortunes and they reached the knockout stages of the last four Heineken Cup competitions, including the final in 2012, where they were well beaten by Leinster at Twickenham.

Ireland international forward Stephen Ferris announced his retirement because of injury on Tuesday and the club announced on Thursday that their redeveloped Ravenhill ground was going to be officially known as Kingspan Stadium from now on, following the signing of a 10-year naming rights deal.

Ironically, Humphreys' brother Ian is returning to Ulster this summer after a two-year stint with London Irish.