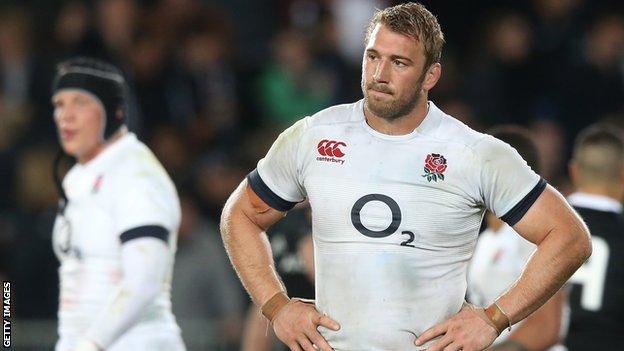 Under-strength England pushed New Zealand all the way in the first Test before the All Blacks showed why they are world champions as Conrad Smith's last-gasp try gave them a dramatic win.

England took a 9-3 lead through the boot of Freddie Burns.

But Aaron Cruden's kicking kept the hosts in it and it was 15-15 with two minutes remaining and Marland Yarde in the sin-bin for England.

The hosts spurned a kickable penalty but Smith dived over to secure victory.

It was a thrilling end to a gripping Test and means the hosts' 20-year unbeaten run at Auckland's Eden Park continues.

'Huge plus for England'

"Today is a huge plus for England rugby. Next Saturday Billy Vunipola, Tom Wood, Courtney Lawes and Dylan Hartley will be available in the pack, and Owen Farrell and Luther Burrell behind the scrum. England will be stronger and have already given the All Blacks a massive fright. These next two matches will be colossal. By the end of the three matches England will know exactly where they are in terms of world rankings and the build-up to the World Cup will be well and truly under way."

It also gives the All Blacks a 1-0 lead in the three-Test series but they were given an almighty fright by an England team missing eight players from the XV which started the final Test in the Six Nations.

England have only won twice in New Zealand, the last time in 2003, and injuries and scheduling issues meant head coach Stuart Lancaster was forced to dig deep into his reserves in some positions, with fourth choice fly-half Freddie Burns forming a makeshift midfield with inside centre Kyle Eastmond, who could not even make the Bath side in the last couple of months of the season.

But they both had fine games - as did virtually every player in a white shirt, with England especially dominant in the scrum - and although Lancaster said he was frustrated not to have won, he will be delighted with confirmation that, 15 months out from the World Cup on home soil, he now has real strength in depth to pick from.

Burns was only playing because first choice fly-half Owen Farrell and third-choice Stephen Myler are not available until next week's second Test because they did not arrive in New Zealand until mid-week following the Premiership final, while second-choice George Ford is absent with a shoulder injury.

There had been some debate as to whether Burns, who had a poor domestic season as his transfer to Leicester unsettled him, or Danny Cipriani should start.

In the end Burns got the nod with Cipriani - back in the England fold for the first time in six years - on the bench, but the former Gloucester man showed few signs of nerves as he kicked England into a 9-3 lead with a quarter of the match gone.

Recalled flanker James Haskell was at the heart of a fired-up performance by the England pack and with captain Chris Robshaw leading from the front the visitors were the livelier side initially.

It was Robshaw's break after two minutes that enabled Burns to give England the lead, and the hosts were lucky to keep 15 men on the field, with Ma'a Nonu penalised for pulling back the supporting Haskell and fortunate not to be sin-binned for the cynical infringement.

It was a stop-start 40 minutes, with both sides struggling to hold onto the ball in threatening positions - England's Player of the Year Mike Brown knocked on five metres from the New Zealand line to end one threatening attack - but the world champions worked their way back into the game and two penalties from Cruden levelled matters at 9-9 at the break.

The hosts must have had the figurative rocket put up them by coach Steve Hansen in the changing room as they came out a different side after the interval and threatened to run England off their feet.

Israel Dagg and Nonu combined for one electric counter attack in the the opening moments of the half but England held out before launching a couple of powerful assaults of their own.

Manu Tuilagi smashed some big holes in the All Black defence and Ben Morgan and Eastmond led a thrilling counter-attack from within five metres of the England line to deep inside home territory before the final pass eluded full-back Brown.

But it was the hosts who edged ahead on the scoreboard as Cruden landed two penalties to one from Burns, and when Yarde was sin-binned for not rolling away quickly enough in the tackle after hauling down galloping New Zealand second row Brodie Retallick to give the hosts the chance to take their 15-12 lead, it looked ominous for England.

Lancaster responded by rolling the dice and reintroducing Cipriani to Test rugby, and his scything break earned the penalty which he then slotted to make it 15-15 with seven minutes remaining.

A rare draw looked on the cards but with a couple of minutes remaining New Zealand were awarded a penalty that, although it was 40-odd metres out, was straight in front of the sticks.

A kick looked inevitable but Cruden tapped and went, and although Jerome Kaino and Wyatt Crockett were both held just short, quick hands from Ben Smith put namesake Conrad over in the corner for the match-winning try.