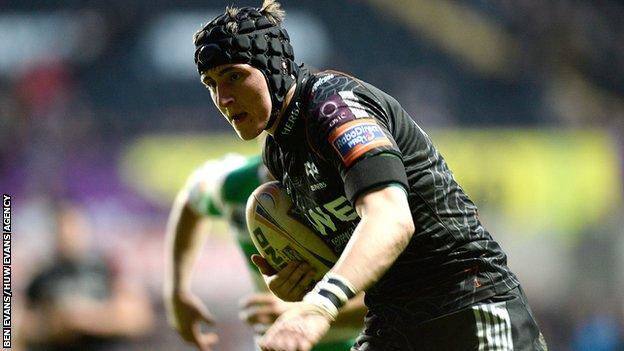 The Ospreys have signed International Rugby Board Junior Player of the Year Sam Davies on a three-year deal.

The 20-year-old fly-half has agreed his first professional contract, which will keep him at the club until summer 2017.

Davies said: "This is my home region and it's somewhere I'm really happy to be."

Last summer, Davies helped the Wales U20 team to their first ever Junior World Championship final, scoring 61 points along the way, becoming only the second Welshman, after Gavin Henson in 2001, to win the IRB award.

Davies added: "I've had plenty of game time over this last year, mostly at 15, and I'm just pleased to be playing.

"Obviously I'd say I want to play 10 as that's where I've always played until this season but I realise that with Dan [Biggar] in front of me it's not going to be easy. If it means I'm involved on a match day, I'll play wherever the coaches want me to and use that opportunity to show what I can do and to gain more experience. "

The Osprey's rugby operations manager, Andy Lloyd, said: "It says a lot about his maturity for such a young man, and also his footballing class, that he has settled in so well to the senior group while coming to terms with not just senior rugby but also an unfamiliar position."