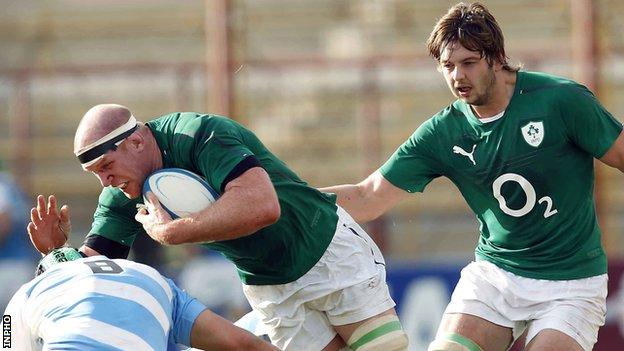 Ireland earned their first Test win in Argentina as they overcame an under-strength Pumas side in Resistencia.

Two Jonathan Sexton kicks put Ireland ahead but the Pumas fought back to lead 10-6 as Manuel Montero scored a superb try after a Nicolas Sanchez break.

But a Chris Henry try put Ireland ahead before half-time and Sexton notched another touchdown after the break.

Ireland captain Paul O'Connell made his 100th Test appearance in Saturday's game while Robbie Diack earned his first cap for Joe Schmidt's side with Kieran Marmion and Rodney Ah You also introduced for their Irish debuts in the second half.

Argentina were minus the vast majority of their frontline European players as the side was based largely around the country's second-string Pampas side.

Diack was guilty of wasting a glorious try-scoring chance for the visitors as he went for glory himself when Simon Zebo and Felix Jones were better placed after a fine break by Darren Cave.

Sexton did kick Ireland into a 10th-minute lead but the visitors then had a lucky escape as a kick from centre Gabriel Ascarate bounced into the touch with the Irish defence nowhere following a tap-and-go out of his own defence from Pumas skipper Martin Landajo.

A further Sexton penalty extended Ireland's lead to 6-0 but the Pumas responded with 10 unanswered points including giant winger Montero's brilliant finish as he fended off the Irish fly-half after a Sanchez break had totally outfoxed Luke Marshall.

The 36th-minute try helped Argentina into a 10-6 lead before the enthusiastic home crowd in the first ever Test match played at the Resistencia venue.

However, with number eight Benjamin Macome in the sin-bin after taking out Trimble in the air, they couldn't maintain their lead to the advantage as Ireland flanker Henry rumbled his way over the line straight after the restart.

Just four minutes into the second period, Sexton was on hand to round off a slick midfield wrap-around exchange with Luke Marshall although the fly-half missed the conversion.

After withstanding 10 minutes of heavy Argentinian pressure, which included a try-saving tackle from recalled Simon Zebo, the Irish put the game to bed as Trimble latched on to a floated Sanchez pass to sprint away to scored under the posts.

Sexton's conversion was one of his final contributions as he limped off with an undisclosed injury but replacement Ian Madigan quickly slotted two penalties to extend Ireland's lead to 29-10.

That margin was somewhat flattering to the visitors and De La Vega crossed for a late try which was converted by Iglesias.

The sides meet again in the Second Test in Tucuman next Saturday.