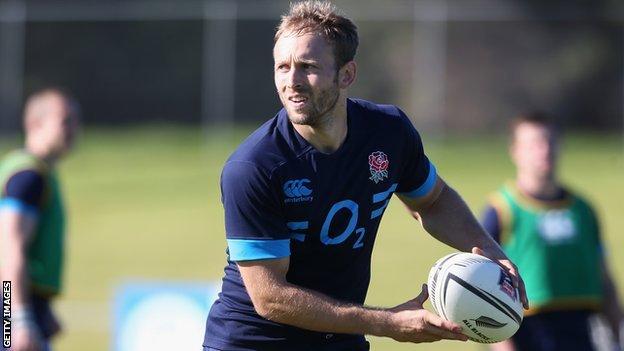 Worcester Warriors full-back Chris Pennell is itching to get a chance after being named on the England bench for Saturday's first Test against New Zealand at Eden Park.

The 27-year-old is proud simply to have been selected in the tour party down under for England's three-Test series against the All Blacks.

But he admits it would be extra special if he makes his international debut.

"I'm desperate to get out there at Eden Park," he told BBC Sport.

"Hopefully I'll get an opportunity to show what I can do.

"I had a fairly big smile on my face when the team was announced and I'm hugely appreciative to Stuart Lancaster for giving me the opportunity.

"I've been inundated with messages from fans wishing me luck. And that means everything to me."

Pennell, one of two uncapped players in the squad, along with Harlequins hooker Joe Gray, will join his former Worcester team-mate Matt Mullan, now with Wasps, on the bench at Eden Park.

"It's a fantastic opportunity for Chris Pennell and Joe Gray, who have really impressed in training," said Lancaster.

Warriors director of rugby Dean Ryan, who himself won six England caps, is excited for Pennell - Worcester's star performer in an otherwise dispiriting relegation season at Sixways, but now kept out of the England team only by Harlequins' Mike Brown.

"I am delighted to see Chris receive further recognition with a place in the squad," said Ryan. "I am confident he will have a positive impact if he does make his debut on Saturday.

"Chris has obviously impressed during his time in the England squad alongside the best players in the country and built on the outstanding form he has displayed over the last year."

Loyal one-club man Pennell has already made it clear that he will remain at Worcester next season, even though they will be playing in the Championship.

If he comes off the bench, Pennell would not be the first Warriors player to be picked by England - but he would be the first back to be selected.

Former Worcester skipper Pat Sanderson captained England on their summer tour to Australia in 2006 towards the end of a career which, also taking in his time at Sale and Harlequins, earned him 16 caps in the back row.

Prop Mullan, now at Wasps, won the first of his three England caps as a Worcester player in 2010. And flanker Matt Kvesic, who left Worcester for Gloucester at the end of last season, was twice capped on England's tour of Argentina last summer, retaining his place in England's tour party for New Zealand.