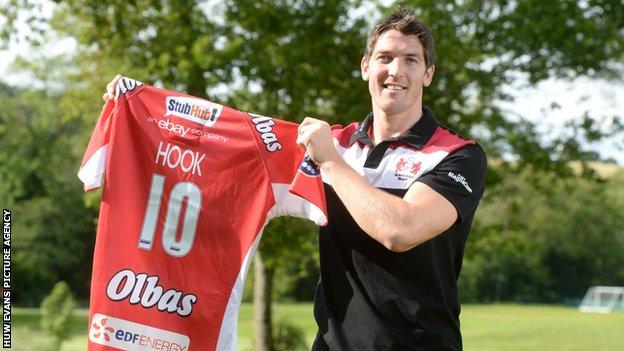 James Hook says the prospect of playing regularly at fly-half helped persuade him to join Gloucester.

The 28-year-old expects to fill the gap left at Kingsholm by Leicester-bound Freddie Burns.

Hook, who has 75 Wales caps, can also play at centre, full-back and even wing but his versatility has sometimes counted against him.

"You want to play in one position consistently... it's nice to go there in that position [fly-half]," he said.

"It's been difficult because I can play four positions, and injuries will happen so I do get moved about.

"It can be quite tough but I've had quite a bit of experience of it now, you learn to deal with it really.

"Some people say it can be a downfall, but it can be a blessing really just being involved in the squad all the time and playing regularly as well."

Hook agreed a four-year extension with Perpignan in 2013, but has activated a get-out clause after their relegation from France's Top 14.

He had also been wanted by his former side Ospreys, who he played with for five years before leaving for France in July 2011, citing the wish to play regularly at fly-half as a major reason.

Ospreys have Wales stand-off Dan Biggar as their current 10, who was voted this season's Pro12 player of the year.

"Yeah, I met the Ospreys. If it wasn't realistic, I probably wouldn't have met them," added Hook, who was a call-up to the 2009 British and Irish Lions tour to South Africa.

"But... the timing wasn't right to come back to Wales and the offer and opportunity to go to Gloucester was too good to turn down.

"Having played there myself a few times for the Ospreys and Perpignan this season, and the fans and the signings they've made for next year... sometimes you've got a feeling, you know?

Hook is part of the Wales squad that is set to depart for a two-Test tour to South Africa and he is relieved to have secured his future before departing.

"Just being able to sign for Gloucester now and knowing the next three years is secure before I go away with Wales is great," Hook said.

"So it's just looking for places to live now, but the hard bit is done really.

"It's just trying to get out there [to South Africa] and get as much game time as I possibly can, and when I do get the game time just being consistent and accurate in everything I do."