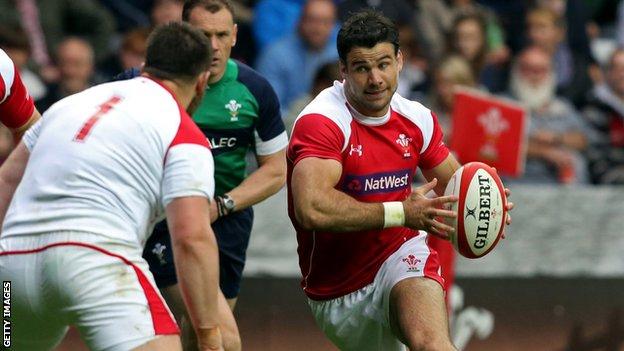 Scrum-half Mike Phillips wants to be a part of history by being in the first Wales side to beat South Africa on their own soil.

The tourists face the Springboks in two Tests on 14 June in Durban and on 21 June in Nelspruit.

"Hopefully we can change that record," said Phillips, 31, the Racing Metro and British and Irish Lions half-back.

"Obviously it's a very difficult place to go and play. But that's the challenge for us."

Wales will play Eastern Province Kings in a warm-up match on 10 June before the South Africa Tests.

Phillips added: "I love playing South Africa. It's a great opportunity for us to go down there and test ourselves against the best.

We've got to be confident in our little group, prepare really well and who knows what can happen?

"We've got to be confident in our little group, prepare really well and who knows what can happen?

"We want to be part of a historic Welsh team to go down there and get the first win."

Phillips' confidence is echoed by former Ireland prop Paul Wallace, part of the British and Irish Lions team that beat South Africa in 1997, who told BBC Wales: "When you look at the squads... Wales look the strongest."

The two other scrum-halves that have been named in the Wales squad are Rhodri Williams and Gareth Davies.

Phillips praised his competition as he looked ahead to the next World Cup.

"They've done really well this season. I think there's great talent in the nine slot here in Wales and it's only good for the future of the team," he said.

"With the World Cup coming up next year and with the competition for places, it's great to drive each other on and get the best out of ourselves."