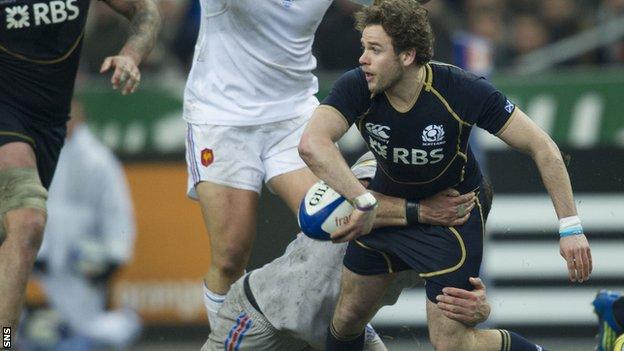 Fly-half Ruaridh Jackson expects a "tough test" when Scotland take on the USA in the first match of their summer tour in Houston, Texas, on Saturday.

Jackson has been drafted in for the first leg of the tour, with new Edinburgh signing Tom Heathcote taking his place for the last two matches.

The match will be Scotland's first under new head coach Vern Cotter.

"The USA are a big, physical team. They bring a lot of aggression and have a bit of pace in the team," said Jackson.

"I know Folau Niua as well. He's been playing at Glasgow for a little bit, so hopefully I won't be falling for any of his dummies.

"I'm pretty excited. It's going to be hot so it will be a tough test."

Jackson, 26, will also be in the squad for the match against Canada in Toronto on 14 June, with Heathcote taking his place for games against Argentina and South Africa.

And he says the early signs under New Zealander Cotter are positive.

"He's had his first meeting with us as a group and said he's a man of few words, but he demands respect," said Jackson who is leaving Warriors this summer to join London Wasps.

"He's got a proven track record, particularly with Clermont over the past few years, and he'll definitely bring something good, and a lot of knowledge to the party.

"I'm really looking forward to working under him."

Jackson won the last of his 23 caps against South Africa in last year's autumn series.