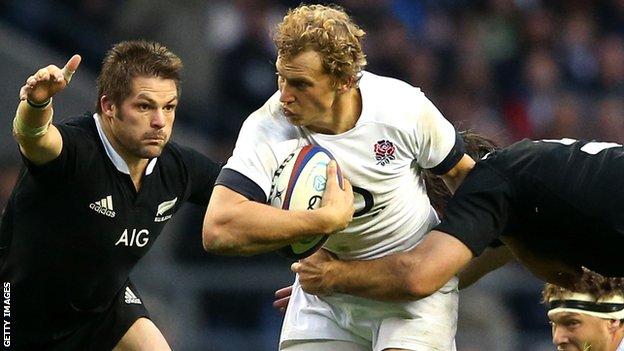 The 25-year-old Gloucester man has been out for a month with an ankle injury and has been unable to train this week.

Bath's Kyle Eastmond is likely to take Twelvetrees' place at inside centre despite not playing since April.

Freddie Burns is set to play fly-half with Premiership finalists Owen Farrell and Stephen Myler missing and George Ford ruled out with a shoulder injury.

Because of a combination of injury and unavailability - players who were involved in Northampton's dramatic Premiership final win over Saracens will not be ready to play until the second Test - England will go into the match in Auckland without eight of the starting XV that lined up in the final Six Nations match this winter.

However, England are the last team to beat the world champions, securing a record 38-21 win in November 2012, and second row Joe Launchbury said they were aiming to hit those heights once again.

"We respect what a great side they are but it was a special day 18 months ago and we benchmark that as a performance we need to reach," he told BBC Sport.

New Zealand were unbeaten last year and the 2012 defeat by England is their only loss in their last 35 games.

England were beaten 30-22 when they met in November 2013, but Stuart Lancaster's men fought back from 17-3 down to take the lead, only for New Zealand to snatch a late win.

"The way we have played against New Zealand in the last two matches has to give us confidence," added Launchbury.

Winger Jonny May said the new faces will not be overawed against the world champions.

"It doesn't get a bigger challenge than the All Blacks away so that's obviously at the back of our minds but at the same time it's just a great opportunity for all of us to go out there and challenge ourselves," said the Gloucester player, who could win his seventh cap.