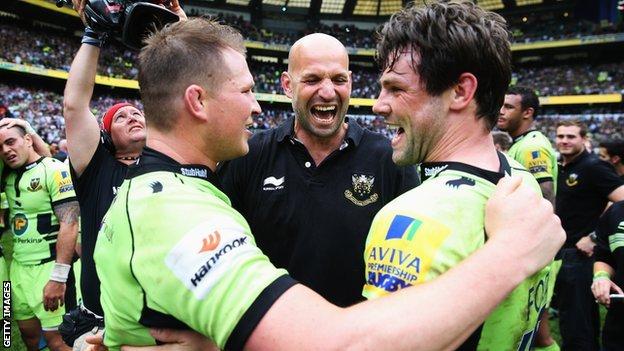 Saints beat Saracens 24-20 to lift the trophy on Saturday.

We believe that stability breeds success

It completed a seasonal double for Mallinder's side who won the Amlin Challenge Cup nine days previously.

"This is a superb club and a brilliant job," he said. "There are not many positions like this in world rugby and I've loved every minute of being here."

Since Mallinder, 48, arrived at Franklin's Gardens in 2007 in the position of head coach, his team have played in nine finals, winning five.

He says the club are "getting better and better" on and off the field.

"We've got a very supportive board of directors, some outstanding staff, both in the playing department and in the offices," he added. "It's all part of a really good group of people that is moving the club forward.

"I'm more motivated now than when I first came here. The challenges are huge. There are plenty of ambitious clubs in the Premiership and we want to be better than them.

"While we are a sustainable business, we are also a rugby club that wants to win games and win trophies and have some happy fans that come back each Saturday."

"Jim has been with us for seven years and we believe that this additional five years will help us build on the platform that he has already established at the club.

"He has the ability to bring individuals through and establish a good team of players, coaches and support staff around him. We've had a fantastic ride here over the past few years."