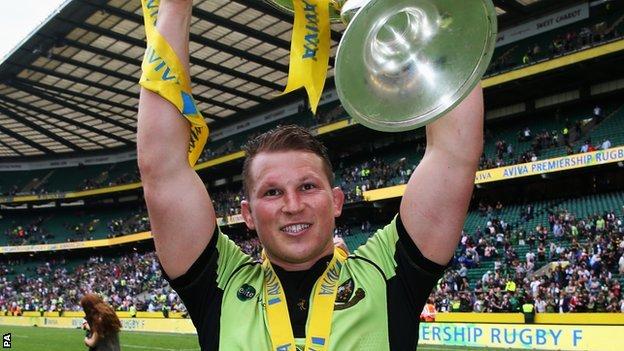 "Rugby-wise, I've been in search of this for 10 years. Every down, every injury, this eradicates it and makes it so worth it."

Sent off in the Premiership final for abusing the referee, he had not only let himself down, but also disgraced his club when they needed their captain most.

He was to receive an 11-week ban and also miss the summer tour of Australia with the British & Irish Lions - a standout series in any player's career.

Northampton went on to lose that final to Leicester while the Lions made history down under.

Hartley had to live with that guilt and pain for 12 long months before finally putting it behind him by helping Saints to their first title, with victory over Saracens at Twickenham.

Rugby-wise, I've been in search of this for 10 years. Every down, every injury, this eradicates it and makes it so worth it

And when the final whistle went at the end of the most dramatic final in Premiership history, there was no prouder man than the 28-year-old New Zealand-born forward.

"For me it's redemption," Hartley told BBC Sport.

"We've made history - we've won the Premiership for the first time ever and you can see what it means.

"I don't think I have any hair left on my head and my fingernails are gone. What an unbelievable feeling."

Northampton's success not only marked a remarkable turnaround for Hartley but, six years on from winning promotion back to the top flight of English rugby, Saints finally landed English rugby's 'holy grail' after several near misses, including last season.

It is an achievement not lost on director of rugby Jim Mallinder, who could not contain his pride after Saturday's narrow victory.

"We knew victory would be sweet and it is. It's a special moment."

After last season's 37-17 defeat by Leicester, the mild-mannered Yorkshireman admitted he would enjoy Saturday's victory with a few beers to celebrate a truly memorable season.

"It's a real sense of relief to get over the line and a special feeling," said Mallinder, who has been with Saints since 2007.

But, with victory in the Premiership final earning the club a trophy they have coveted for so many years, there is no sense of the job being completed.

Mallinder spoke of his desire to build on this season's achievements, while fly-half Stephen Myler admitted that with the "monkey now off their back" there is no limit to what the side can achieve.

Last season's squad was improved by the arrival of, among others, Wales and Lions winger George North from Scarlets, Alex Corbisiero (London Irish) and Salesi Ma'afu (Western Force), coupled with the growing maturity of players such as Tom Wood.

And Mallinder will now be confident of establishing Northampton as a major force for years to come.

"The challenge now is to retain the thing," he added. "We've enjoyed this journey, and we will have the same group of players so there is no reason why we can't defend it."

While Saturday's post-match interviews with Wood, Myler and Mallinder focused on the future, for majority shareholder Keith Barwell there was a sense of reflection after years of hard work, high emotion and huge investment.

Local businessman Barwell and his family, who have owned the club since 1995, have stuck with them through relegation, promotion, Heineken Cup and Premiership final defeats.

In June 2013 he lost his son Leon, Northampton's former chairman, to cancer.

And he joined his players in dedicating victory to Leon and teenage cancer victim Luis Ghaut - a lifelong fan - as well as the club's supporters.

"The people that drive me on are our supporters," Barwell told BBC Radio Northampton. "It's brilliant.

"You promise them things but you cannot personally deliver them yourself, but we've been brilliant this season.

"Sometimes I did doubt it would come, but I've always had good people and sometimes you need the rub of the green.

"It does feel worth it, but I can feel a headache coming."

It is a headache and hangover that no-one could begrudge Northampton's loyal figurehead.