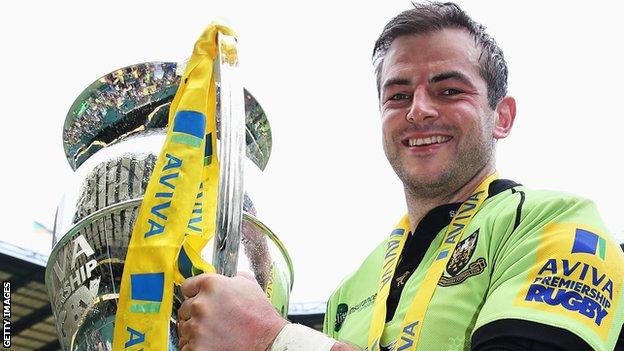 Alex Waller's try in the last minute of extra time sealed the win and completed an incredible 12 months for Saints.

They have now won both the Premiership and Amlin Challenge Cup titles, having lost last season's domestic final.

"It's something else. It's unbelievable and the culmination of years of hard work," Myler said. "I'm so proud."

With Saints trailing by three points heading into the final minute of extra time, Waller bundled over from close range to spark wild celebrations at a sold-out Twickenham.

Stand-in captain Tom Wood felt his side deserved to edge the final, and believed their fitness and freshness swung the match their way, with table-toppers Saracens still reeling from their Heineken Cup final loss to Toulon last weekend.

"We always believed in ourselves," Wood told BBC Sport. "We saw them tiring. We had the edge.

"I felt the advantage was with us. We pride ourselves on fitness and, as tired as we all were, we only had to look at them. I always felt it was ours to win."

Myler added: "It's hard to describe - it was a strange game; it ebbed and flowed.

"It's heartbreaking for Saracens, but there has to be a winner and I am absolutely over the moon that it is us."

Saints actually only needed a tie in extra time to win - having the advantage of two tries to Sarries' one - so a drop-goal or penalty would have sufficed.

But Myler, who kicked nine points in the final, said he was happy to pass up the responsibility of finding the winning score.

"It's amazing for Alex," he said. "The squad is the strongest it has been and I'm really proud to be part of this team."

Saracens felt Owen Farrell's disallowed 61st-minute try should have stood, after referee JP Doyle appeared to have awarded the score only to refer the decision to TMO Graham Hughes.

Hughes eventually disallowed the try for a forward pass by Alex Goode earlier in the move.

"Most teams in the Premiership would say the protocol has become a shambles - it's almost make it up as you go along," said Griffiths.

"Some referees use the TMO as a kind of video operator - 'show me that again please' - others take instruction, others take guidance.

"This sounds like sour grapes but it isn't, because this would be the case had that final try not been given."