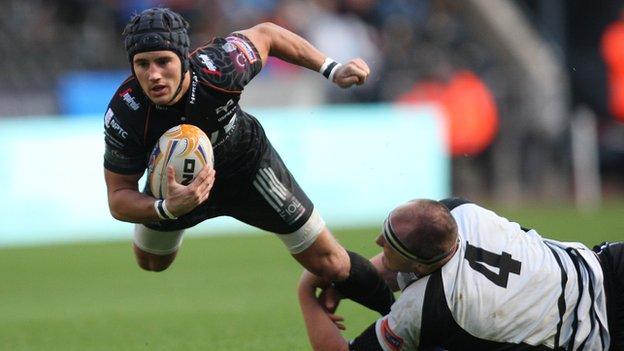 The mercurial Matthew Morgan was supposed to be flying to Las Vegas on holiday with friends on Thursday, 5 June.

But after rolling the dice as a second half substitute for the Possibles against the Probables, the 22-year-old will be on the plane to Durban for Wales' summer tour of South Africa.

Morgan's surprise selection, after a frustrating season with the Ospreys, was earned with the kind of crowd-pleasing cameo role, which was a trademark of his increasingly rare appearances for the Welsh region, in the latter half of the 2013-14 season.

Morgan's philosophy - like that of another famous former Osprey Shane Williams - is simple: Why kick, if you can run?

He came on at half time with the Possibles - who at one point were described by Scrum V pundit Jonathan Davies as the "Impossibles" - trailing 34-0 at the start of the second half.

His elusive running from deep in his own territory ignited a big, but until-then passive crowd at the Liberty Stadium - and delighted Wales coach Warren Gatland.

It made little difference to the result as the Probables - with Taulupe Faletau, Alun Wyn Jones and Jonathan Davies outstanding - ran out 55-7 winners.

And Morgan was surprised to hear his name when Welsh Rugby Union chairman David Pickering read out the names of the 32 players who will travel to South Africa.

"If you'd asked me at the start of the season if I thought I'd be going on the tour of South Africa I'd have said: 'no way'," he said.

"It's a dream come true.

"When they mentioned me before reading out the team I was looking around as if to say 'is it me?' Then it sank in.

"I booked in March to go to Las Vegas [on holiday] next Thursday. My friends have been calling me up to say 'what have you gone and done'."

Morgan, at 5ft 7in and less than 12 stones, hardly fits the profile of the modern rugby player.

He is also at odds with the kind of player Gatland is frequently accused of favouring - think of the giant three-quarters: Jamie Roberts, George North and Alex Cuthbert. Every one of them well over 6ft and 16st.

Gatland, however, was delighted that Morgan had used the first Welsh team trial for 14 years to his obvious advantage.

"I suppose that's the romance of the trial someone can produce something, do something and get their name on the touring sheet and I thought that was special about tonight," said the New Zealander.

But are Wales really going to take on the fearsomely physical Springboks with the kind of high-risk counter-attacking rugby which Morgan purveys?

If Morgan is on the field, then the answer is most definitely yes.

"I'll do the same out in South Africa. That's the way I play," he added.

"It's what the fans like to see in Welsh rugby, they want to see running rugby not the ball being kicked all the time."

Morgan is equally adamant that he's made the right decision in moving to play in Bristol next season.

"I did have an offer to stay in Wales from Newport," he said. "But not from the Ospreys."

Morgan's play and selection were highlights of an unusual and remarkable night at the Liberty Stadium.

The trial was called by the Wales team management after none of the Welsh regions qualified for the latter stages of European and Pro 12 competitions.

However, the decision to announce the touring party within hours of the final whistle - with the players, their families and media present - led to inevitable thoughts that it was conceit and in fact the players already knew who was on tour.

But the reactions of the players and their close families in the dining room seemed genuine to anyone there to see it.

Pickering's naming of Morgan and Blues hooker Matthew Rees - who has undergone chemotherapy for cancer during the season - before he read the full list was greeted with cheers.

More followed when Scarlets scrum-half Gareth Davies was named and Dan Biggar - though few could have doubted the Ospreys fly-half's touring credentials.

"I had no idea beforehand, it was a big relief," said Gareth Davies.

"My mother was a nervous wreck."

And spare a thought for the parents of Aaron and Steven Shingler - who both made the cut.

"I was chuffed when my brother was named, and then when my name came out it topped it off," said Steven.

"My mother is thrilled to bits."

The injuries sustained by Racing Metro centre Jamie Roberts and Scarlets hooker Ken Owens are not thought to be major concerns, but a shoulder injury for Scarlets tight-head Samson Lee is more serious, though x-rays suggest there are no broken bones.

So the Wales team management's gamble on a trial six days before flying on a tour was not risk-free.

But a crowd of more than 20,000 and a fairytale end to a difficult season for an exciting young talent reminded us that - just occasionally - gamblers do win.

Bristol-bound utility back Matthew Morgan took a gamble at the Liberty Stadium on Friday night, and as a result will miss out on a trip to the roulette and blackjack capital of the world this summer.