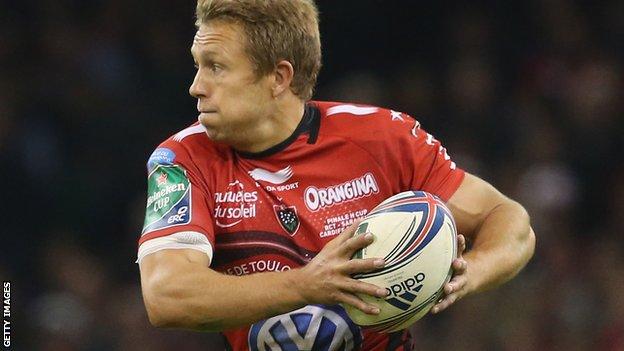 Toulon captain Jonny Wilkinson will end his playing career in the Top 14 final against Castres in Paris on Saturday.

But the former England fly-half, 35, insists he has had lots of practice for the occasion, because he plays every match as if it was his last.

He said: "It's a relatively simple mindset because it's been the same throughout my career.

"I've always only ever worried about and concerned myself with the game that's coming."

Wilkinson won 91 caps for England and famously kicked the winning drop goal against Australia to win England the World Cup in 2003.

He led Toulon to victory in the last Heineken Cup in last weekend's 23-6 win over Saracens in the Cardiff final.

The former Newcastle Falcons player said: "Coming to the end of my career, it's emotional but it doesn't change anything.

"I've deliberately kept it that way, kept it simple and enjoyed the fact that the words of saying 'you play every game like it's your last' will be true this time."

Wilkinson will join the coaching staff at Toulon, the club he joined in 2009, at the end of the season.

But he admits he is unsure of how he will feel once his 17-year playing career ends.

"That's the unknown for me, that's the difficult bit - not really knowing if I'm looking forward to it," he said.