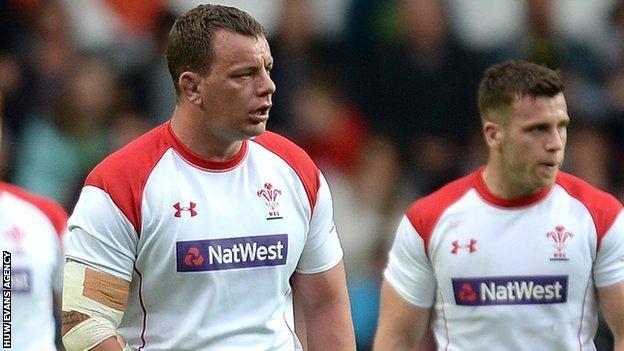 Former Wales captain Matthew Rees completed a season in which he underwent testicular cancer treatment by being named in the squad to tour South Africa in June.

He joined Cardiff Blues after eight seasons at Scarlets ahead of the 2013-14 season.

But Rees was diagnosed with cancer in October and had to relinquish the Blues captaincy and his place in the team to undergo treatment.

He returned in March and made enough of an impact to earn the role of Possibles skipper as they were beaten 55-7 by the Probables in Friday's trial.

That was held ahead of the tour squad announcement.

Morgan, who leaves Ospreys for Bristol this summer, is arguably the biggest surprise in the tour party.

At 5ft 8in tall and weighing a little over 11st, the 22-year-old has his chance after an impressive display as a second-half Possibles replacement at full-back.

He has also been largely an Ospreys understudy to Wales incumbent Dan Biggar and 2013 World Under-20 player of the year Sam Davies.

However, Davies does not make the tour squad.

Morgan's display at Liberty Stadium in the trial prompted Wales coach Warren Gatland to say: "The beauty about tonight was one or two players - and particularly one - came from nowhere and came on in the second half and made an impression.

"I suppose that's the romance of the trial someone can produce something, do something and get their name on the touring sheet and I thought that was special about tonight."

Scarlets wing Jordan Williams, 20 also belongs to a style of play at odds with the global trend for large, powerful players.

Like Morgan, Williams is an elusive, pacey attacker who relies on guile rather than size and strength.

However, the International Rugby Board ruled Steven Shingler was tied to Wales after he was deemed to have played in what was classified as a national "capture" Under-20 fixture.

The squad was named after a trial at Swansea's Liberty Stadium in which Jonathan Davies scored a hat-trick as for the Probables.

Scarlets tight-head prop Samson Lee, 21, who came on as a Probables replacement, left with his left arm in a sling.

And despite being named in the tour party, he is considered a serious doubt to have the chance to add to his three caps.

Lions centre Jamie Roberts, 27, and with 56 caps also left the fray with a shoulder problem.

And 27-year-old Probables hooker Ken Owens also limped out of the action, but he and Roberts are expected to go to South Africa.

Gatland also named Racing Metro's Lions flanker Dan Lydiate, 26, despite his absence from the trial with a hamstring strain.

Lions Full-back Halfpenny and open-side flankers Warburton and Justin Tipuric were ruled out by shoulder injuries.

England-based players were ruled out of involvement in the trial when Aviva Premiership clubs refused to allow their Welshmen to play.

And Leicester fly-half Owen Williams' six-week ban for foul play ruled him out of contention.

North, of Northampton Saints, is involved in Saturday's Premiership final when they face Saracens at Twickenham.

Gatland's side face a warm-up match against Eastern Province Kings in Port Elizabeth on 10 June.