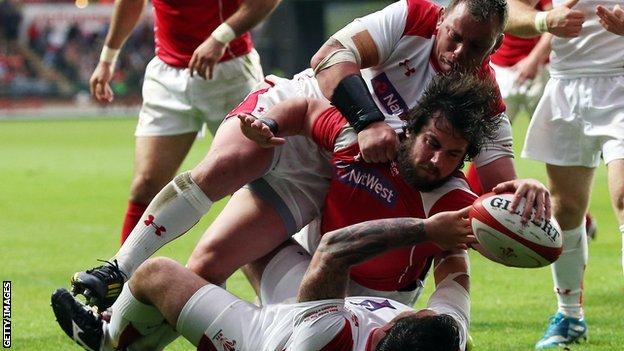 Dan Biggar, Liam Williams and Scott Baldwin also went over for the Probables.

Gareth Davies went over after the break for the Possibles with James Hook adding the conversion.

The game was held ahead of coach Warren Gatland's announcement of his squad to face South Africa in two June Tests.

The Probables, with Rob Howley in charge, were dominant from the off and it was not until after the break that Possibles were able to make any notable attacking headway.

Osprey Biggar was next to the line as he combined with Newport Gwent Dragon Taulupe Faletau to break clear. Fly-half Biggar added the first of his conversions.

Biggar added a penalty before helping Clermont Auvergne-bound Scarlet Davies to the first of his tries.

Davies' second came two minutes after his first touchdown and by the time he went over for his third, Scarlets full-back Liam Williams had crossed.

There was no let up after the break as Ospreys hooker Scott Baldwin - on for Ken Owens - crashed over.

The introduction of Matthew Morgan, the Ospreys fly-half who joins Bristol this summer, pit some pep into the Possibles' attack.

And Jonathan Davies was able to welcome his younger brother James, a Scarlets open-side, to the fray as the latter came on for the Possibles in the second-half.

But they were unable to match their rivals' greater familiarity until scrum-half Gareth Davies' solo burst brought their opening score.

The Scarlets star changed direction and his pace and power allowed him to beat Alex Cuthbert's attempted tackle to touch down.

Jordan Williams ended the game as its first and last scorer as he went over unopposed in the corner for Bigger to convert.

Warren Gatland's side face a warm-up match against Eastern Province Kings in Port Elizabeth on 10 June.

The Probables were denied when Hook was judged to have run into a team-mate before putting Blues' flanker Ellis Jenkins over.