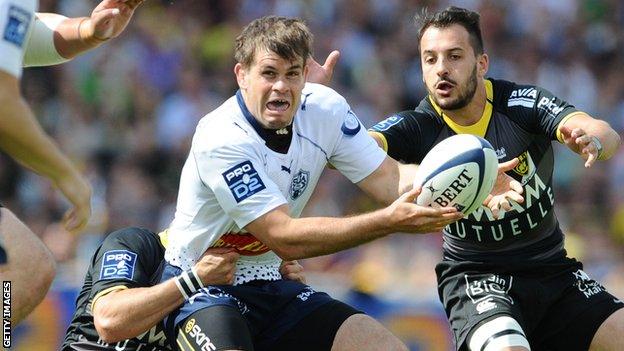 Ludik, 27, has been playing for Agen in French rugby's second flight over the last year after moving from the Sharks.

The full-back made 84 Super Rugby appearances for the Sharks and was included in South African's training squad in 2008.

His arrival on a two-year contract will end speculation linking Glasgow full-back Stuart Hogg with Ulster.

Hogg is understood to have held discussions with Ulster officials a number of weeks ago but the Ravenhill club's director of rugby David Humphreys said on Friday that Ludik was their "final non-Irish eligible signing for 2014-15".

"He will add quality and provide experience to our young backline and his experience of northern hemisphere rugby in France over the past season means he is well prepared for the challenges of European rugby," added Humphreys.

Ludik, who won two Currie Cup medals in his three-year spell with the Sharks, said that he was "very excited" to join Ulster.

At Ravenhill, the full-back will link up with another former Sharks player Ruan Pienaar and Wiehahn Herbst who is joining the Irish province from the South African Super Rugby club this summer.

"I watched a few Ulster games this season and I was really impressed by the passion and character that the team showed," added Ludik.

"The Ulster backline is packed full of top international players and it will be a challenge for me to try and break into the team."

With regular Ulster full-back Jared Payne in line to switch to centre next season, Ludik should have an opportunity to stake his claim for the number 15 jersey.

"With an increasing number of Ulster players involved in the Ireland international set-up it is important for us to continue to build a squad with strength in depth in all positions," added Humphreys.