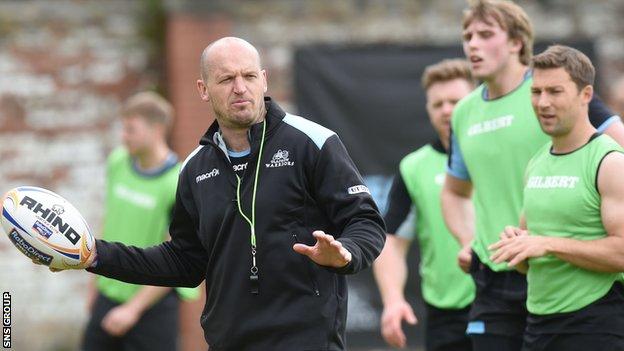 Head coach Gregor Townsend insists it will not be a shock if Glasgow overcome Leinster in Saturday's Pro12 final.

The defending champions have home advantage and the Warriors have won just once in 19 trips to Dublin.

But Townsend told BBC Scotland: "We have built up a lot of good momentum, winning our last nine games.

"And the turning point in our season came in our last game against Leinster when we showed both sides of the ball that we can play really good rugby."

Glasgow lost out 28-25 on that occasion in March but then embarked on an impressive winning run to finish second in the league standings behind Leinster.

The last of those successes was a bruising 16-15 victory over Munster to reach the club's first final, having fallen at the semi-final stage in three of the last four years.

"We've won those nine games against some top quality opposition and we have had to play really well to win those games," added Townsend.

"It shows that investment in the pro game can result in performances like the one against Munster.

"And for Scottish sport it would be fantastic if a Scottish team could win the title."

This will be a fifth successive final for Leinster, who are bidding farewell to superstar centre Brian O'Driscoll at the RDS Arena.

The Dubliners have lost three of the last four, including two on home soil, but boast an impressive cast of experienced internationals in support of the retiring O'Driscoll.

"We know it's going to be a very competitive game," added Townsend.

"I love what Leinster do. Before I took this job I analysed a lot of what they do on the field and also saw what they did off it in terms of growing a club, growing a culture.

"I have massive respect for what they have achieved. They have been consistently the best team in Europe over the last five years.

"They have three European titles and they are the reigning champions in our league, so we know we are going up against one of the best teams around and we'll have to play at our very best to win."

Skipper Al Kellock is relishing the chance to play in such a high-profile match after eight years with the Warriors.

"I've never known interest like this and we have a massive responsibility but you can't let that get on top of you," said the experienced second row.

"There is excitement and there are nerves but it's how you deal with it.

"I've said to the young lads not to put them to the back of your mind and ignore them. Put the nerves to the forefront and get them out so you don't pitch up to the game and get surprised by the emotion that takes over.

"We need to get out there and play 80 minutes of of our best rugby and I believe if we get that it will be good enough to win."