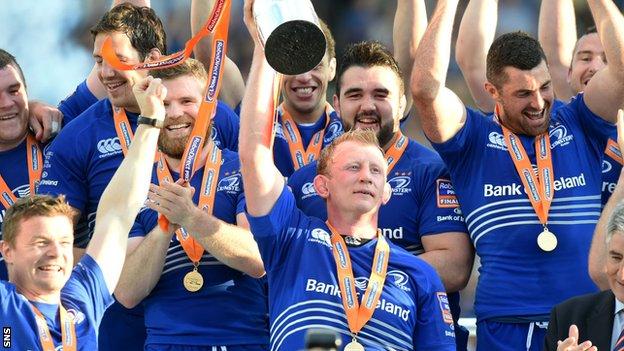 Leinster became the first side ever to retain the Pro12 title with a comfortable triumph over Glasgow Warriors in the final at the RDS.

Zane Kirchner ran over twice for the Irish side and further tries from Shane Jennings and Gordon D'Arcy saw Leinster streak away after a tight first-half.

Glasgow's points all came from the boot of fly-half Finn Russell.

Brian O'Driscoll's last match before retirement last just nine minutes as he limped off with a hamstring injury.

Playing in their all-white change kit, Glasgow made a promising start as they attempted to become the first Scottish side to win the title.

Russell charged down a kick from opposite number Jimmy Gopperth, but Warriors infringed at the resulting breakdown to concede a penalty.

The Glasgow fly-half was offered the first opportunity for points five minutes in when Leinster were penalised for an offside and the 21-year-old showed he had the nerves to handle the occasion by stroking over the penalty from 40 metres.

It was a match billed as the farewell to O'Driscoll, but the great man's day was cut short as he limped off to rapturous applause from both sets of fans.

Russell had a chance to double Glasgow's advantage on 12 minutes when Tommy Seymour was the victim of a high-tackle and, despite a less than sweet connection from the touchline, his kick dropped over the crossbar via the upright.

The champions hit back immediately, putting together several phases of possession and stretching the Glasgow defence.

Despite some heroic defending, Leinster's patience paid off as Rob Kearney put wing Kirchner over in the corner. Gopperth slotted the extras to put them 7-6 in front.

On 34 minutes, Leone Nakarawa, on for the injured Chris Fusaro, made a barnstorming break for Glasgow, swatting away four tackles to make it into the 22 before Leinster were penalised for handling in the subsequent ruck. Russell dispatched the straightforward penalty to put Warriors 9-7 up.

Glasgow were, however, exposed two minutes from half-time when Kirchner cut their defence open and kept his cool to slip in flanker Jennings. The converted try put Leinster 14-9 to the good.

Warriors were given another penalty chance right on half-time and Russell's flawless form with the boot continued from just inside the Leinster half to reduce the arrears to 14-12 at the break.

That boost right on the whistle was followed by a lucky escape for Glasgow four minutes into the second-half.

Pinned back by a clever kick from Kearney, Pat McArthur's disastrous overthrow at the lineout landed in the arms of Jennings and Cian Healey looked to have ploughed over for Leinster's third try. However, the video referee decided Healy was held up over the line by the Glasgow defence.

Warriors had another piece of good fortune moments later when Gopperth's penalty came back off the post.

Gregor Townsend's Glasgow were now tiring and depleted - having lost five players - and a collapsed scrum brought Leinster another penalty in front of the posts, which Gopperth scored for a 17-12 lead.

A rush of blood from Nakarawa saw the Fijian enter the side of the ruck and give Gopperth another penalty chance - and again the fly-half punished Glasgow to leave the Scots hanging on at 20-12. The scoreboard, and momentum, was with Leinster.

Glasgow continued to try to play their attacking off-loading game, but poor handling undermined their efforts to break free of their own territory.

With the Leinster support in fine voice and sensing a fourth Pro12 title in the offing, Gordon D'Arcy broke free of an exhausted Warriors defence to set-up Kirchner for his second try. Gopperth fired another nail in the Glasgow coffin with the conversion to put Leinster in complete control at 27-12.

Niko Matawalu, on for the injured Cusiter, battled on to try to give his side a spark, but his ill-judged chip-kick was gathered by Eoin Reddan and, with a huge overlap out wide, D'Arcy got in on the act with a try of his own.

Gopperth was now well in the groove with the boot and his touchline conversion sailed between the uprights to make it 34-12 and seal a comprehensive win, and the Pro 12 title, for an impressive Leinster.