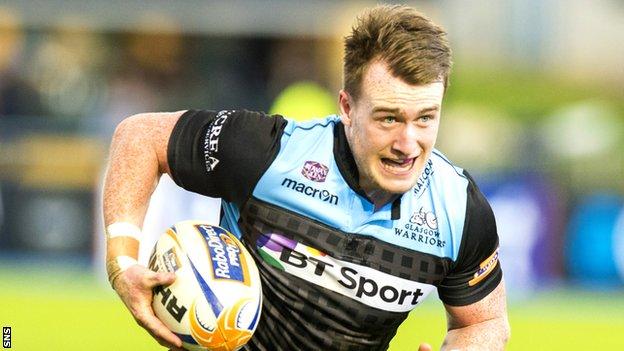 Townsend said it was difficult to omit the 21-year-old British and Irish Lion from his squad for Saturday's Pro12 final against Leinster.

The Scotland star was also left out of the semi-final win over Munster.

"He's got a contract and I'm looking forward to working with Stuart next year," Townsend told BBC Scotland.

"Stuart didn't play in the semi-final and that was a very tough decision.

"Peter Murchie has played eight out of our last nine games. We've won all of those and he's been getting better and better.

"Stuart trained really well but we rewarded most of the squad who played in the semi-final."

Hogg, who has a year left on his Scotstoun contract, has been linked with Pro12 rivals Ulster. However, they have just signed South African full-back Louis Ludik as their final overseas player.

The full-back came through the ranks with Glasgow, and made his Warriors debut in season 2010-11 before winning his first cap during the 2012 Six Nations.

He was one of the four Scotland players called up to the Lions squad for the 2013 tour to Australia, and was the youngest member of the party.

Meanwhile, it has been announced that the match between Glasgow and Leinster will be screened live by both BBC Two Scotland and BBC Alba.

Warriors supporters who cannot travel to Dublin for the final will be able to watch the game on a big screen in Merchant Square in Glasgow.

There will also be a Fan Zone at the Ballsbridge Hotel in Dublin from 12:00 BST for supporters going to the game.

Scottish Rugby director of commercial operations, communications and public affairs, Dominic McKay, said: "This will be a historic occasion for Glasgow Warriors and Scottish rugby and we're delighted the game will be shown live on BBC Alba and BBC Two Scotland on Saturday.

"BBC Alba have screened the majority of Glasgow's games this season on their way to the final and are big supporters of Scottish rugby.

"It's fantastic that even more people will get to watch the final on Saturday evening and we'd like to thank BBC Alba and BBC Scotland for showing the game live.

"Everyone at Scottish Rugby would like to wish the Warriors all the very best in the final."

BBC Alba head of content Alan Esslemont added: "We are delighted to be bringing viewers a fantastic live package from Saturday's RaboDirect Pro12 final as Glasgow travel to Dublin to take on Leinster.

"BBC Alba's coverage this season has been very well received and we are looking forward to Saturday's game with much anticipation for Glasgow.

"It will be the exact same programme output from BBC Alba that will be screened live on BBC TWO, allowing a greater fan base to enjoy our production and the live action as it happens."