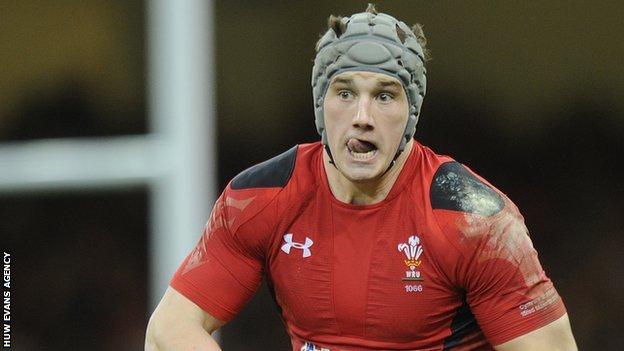 British and Irish Lions centre Jonathan Davies will do no favours for his brother James if they clash in Friday's Wales trial in Swansea.

Uncapped Scarlets flanker James Davies, 23, is on the Possibles bench to face the Probables at Liberty Stadium.

Jonathan, 26, with 39 Wales and three Lions caps, said: "It would be good to see him out there, but there won't be any favours - let's just say that.

"My mum and dad will be there - I'm sure they'll be supporting my brother."

The brothers have nicknames with Jonathan known as Fox and James as Cub.

They currently live together, although Jonathan is preparing to join new club Clermont Auvergne ahead of the 2014-15 season.

Meanwhile James has been given a Scarlets senior contract having starred for Wales Sevens while also appearing for Carmarthen Quins in the Welsh Premiership.

The Probables v Possibles trial ahead of Wales' two-Test June tour to South Africa has given the Davies brothers the chance to enjoy some off-field banter.

Jonathan said: "He [James] made a claim last week about him dominating or whatever in the back garden, but I don't really remember that.

"So hopefully I get one up on him."

And Jonathan says while his parents may find the trial interesting, "as long as we both get through it alright, I think they'll be happy".

Wales name their tour squad after the trial on Friday night in a press conference that will be shown live on the BBC Sport website.

Warren Gatland's side face a warm-up match against Eastern Province Kings in Port Elizabeth on 10 June.