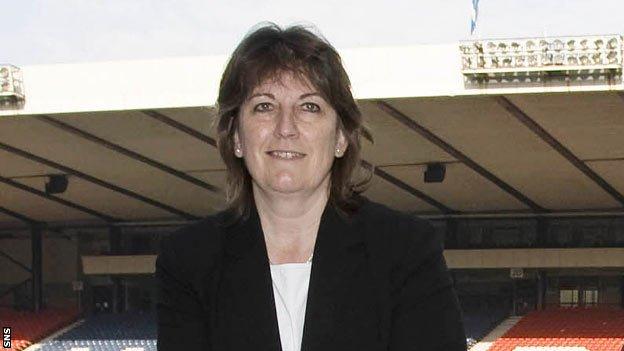 The Scottish FA's head of women's football is switching sports to take up a new role at Scottish Rugby.

Begbie said she would bring a "blueprint of success" from 16 years in her role in women's football.

SFA chief executive Stewart Regan praised Begbie for her "drive, commitment and expertise" and said she would be a loss to the sport.

Scottish Rugby said it was "delighted" to announce Begbie's appointment to the newly-created position in their set-up.

Begbie will report to director of rugby Scott Johnson, who described her recruitment as "wonderful".

"Sheila has had a great career in Scottish women's soccer and this shows our intent to make women's rugby a priority, and how important this aspect of the game is to our organisation," he added.

Begbie said she was looking forward to her new role and helping to improve the women's game.

"I would like to thank my colleague [Scotland women's football head coach] Anna Signeul. I have worked very closely with her to develop a national and regional network of Performance Centres throughout Scotland.

"I have also developed many new skills and ideas through working with her, and nothing would give me more pleasure than to see her qualify for a major tournament with our women's team."

Regan praised Begbie's impact in women's football and wished her success in her new role.

"Her drive, commitment, expertise and connections across sport and politics have helped the women's game take huge leaps forward at all levels," he added.

The SFA has begun the search for a new head of women's football, advertising the position on its website.