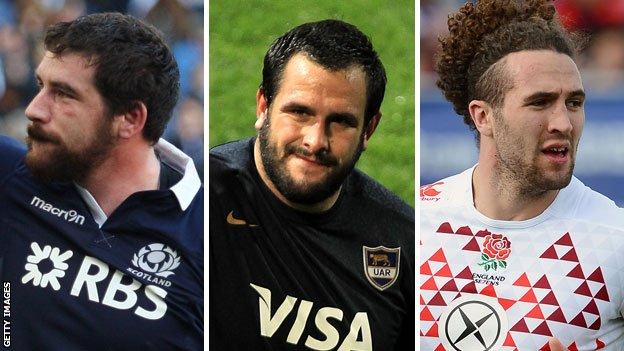 Hamilton, 31, has won 55 caps for his country and has spent the last year with French Top 14 club Montpellier.

Figallo has represented the Pumas on 22 occasions and the 26-year-old will also join Sarries from Montpellier.

Ellery, 24, began his senior career with Moseley but joined the England Sevens set-up in 2012.

The trio will move to Allianz Park for the start of the 2014-15 campaign.

Saracens director of rugby Mark McCall said: "Last year we identified a handful of players who we felt would improve what is now a stable, successful and developing squad.

"After long and detailed negotiations, we are pleased to have finally secured each of our targets.

"Juan Figallo will prove a massively significant signing and Jim Hamilton is one of the most respected lock forwards in the game.

"Mike Ellery has been making headlines on the Sevens circuit, and we are looking forward to helping him realise his full potential in the 15-man game."