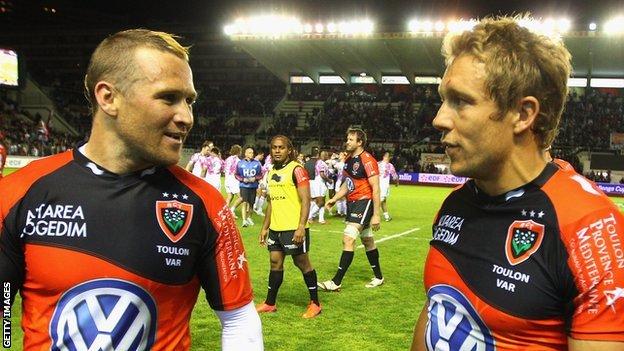 Coach Rob Howley says Wales Probables need the motivation on display in training against Toulon when they face the Possibles on Friday.

Wales' squad for the two-Test June tour South Africa will be named after the trial at Swansea's Liberty Stadium.

Howley said: "We need to take that motivation and that challenge - what we had this morning in training - into Friday night."

They remained in Wales until Tuesday before flying to Paris for the Top 14 final against Castres on Saturday rather than make the trip via Toulon.

And that gave Howley the chance to pit the side he is coaching against the likes of England legend Jonny Wilkinson, ex-Australia centre Matt Giteau and South Africa wing Bryan Habana.

"For some of these guys it's been a very, very long season and this morning some of our youngsters - new players within the squad - we trained against Toulon," said Howley.

"And for them to train against Jonny Wilkinson, Matt Giteau, Bryan Habana and obviously the forwards with the [Toulon] pack... what a great message for these guys.

"They thoroughly enjoyed it [and were] hugely motivated."

Howley says the trial is the start of Wales' build-up to the 2015 World Cup when their pool rivals will include the Wallabies and hosts England.

"It's an important game for everyone involved and it's the start of a World Cup journey," said Howley.

"It's only 14/15 months away and what happened within our environment before last Rugby World Cup 2011 - three, four, five fresh faces turned up and sort of changed the dynamics of the whole group."

The former Wales and British and Irish Lions scrum-half added: "What we've said to the Probables - they'll prove on Friday night... whether talent is over-rated because attitude is going to be a huge factor.

"And if one team wins solely on attitude, it's not going to be the Probables."

Possibles coach Robin McBryde also underlined how important the occasion will be.

"We met briefly last Friday because I thought it was important to get the mindset right because it needs to be a meaningful fixture, meaningful occasion." said the ex-Wales and Lions hooker.

"Not only short-term in preparation for the South Africa tour, but in terms of the World Cup as well because their performances will stick in the mind.

"We've said before, we measure the players when they're playing local derbies or European fixtures.

"And it's very rare you get an opportunity to play against an international team and that's what we're doing.

"We're playing against a full Wales international team, not a bad one.

"So it's going to be a big test and the occasion - 16,000 tickets sold already... that sense of occasion itself will bring a lot of added pressure on to the shoulders of the most inexperienced players.

"So that's where we want to measure them. It's a fantastic opportunity."

The Wales tour starts with a warm-up against Eastern Province Kings in Port Elizabeth on Tuesday, 10 June.

Wales face the Springboks in Durban on Saturday, 14 June and again in Nelspruit a week later.