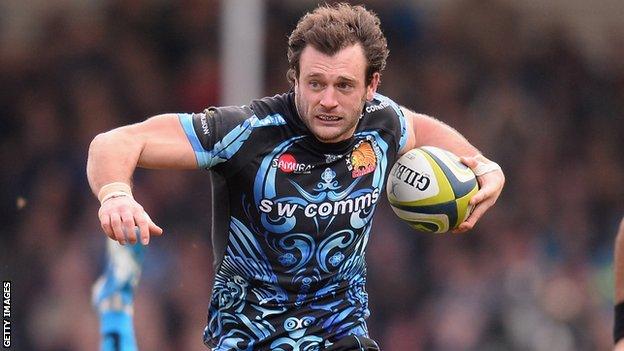 The 29-year-old but wants to leave for personal reasons.

"That's going to happen so we've got to look to strengthen our squad in that position," Baxter told BBC Sport.

Arscott, who has scored 11 tries in 98 matches, joined Exeter from Bristol in 2010 after losing to the Chiefs in the first ever Championship play-off final.

He has been linked with a return to Bristol, as well as their neighbours Bath.

Exeter do have options at full-back, with Phil Dollman and England winger Jack Nowell having both played there.

"Phil Dollman's done well playing at full-back. At some stage over the last two or three seasons he's been first choice there.

"We've also got Max Bodilly coming though, Jack Nowell started his senior career as a full-back so we've got options there.

"But we do think we might be a little bit light there so we are looking for another full-back."

Meanwhile, Exeter are close to signing a new second-row after James Hanks last month because of a neck injury.

"We're pretty close to finalising a replacement, but because we haven't got anything signed on the dotted line there's not too much I can say on that at the moment," Baxter said.

"We'll definitely be signing at least one second-row and potentially a couple of other players.

"But I'm not one for just filling the squad for the sake of it, we can stay in the market to recruit players for quite a long time.

"There's plenty of time left to recruit players to take part in next season without panicking and just signing a body to fill the squad who potentially may not play too much. I'd rather we gave gametime to some of our up-and-coming academy players.

"We're likely to look at a full-back, potentially one other back and one or two second-rows."