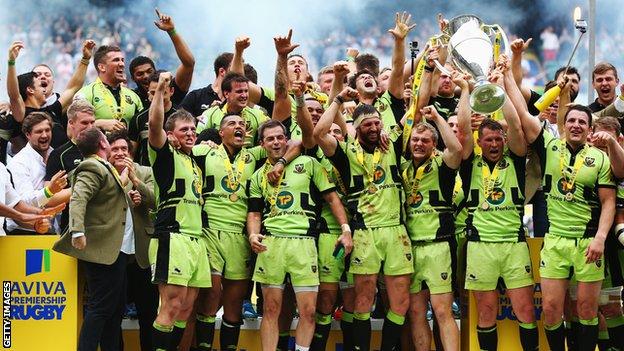 Alex Waller's try in the last minute of extra time won Northampton their first Premiership title with a dramatic victory over Saracens.

Marcelo Bosch's try levelled the scores but Charlie Hodgson's kick hit the post to send the game into extra time.

Stephen Myler and Hodgson traded early penalties in the first half of the extra 20 minutes.

Sarries then edged ahead through the boot of their veteran outside-half Hodgson.

But, as the game neared its conclusion, intense Northampton pressure eventually told, replacement Waller barging over under the posts and, after a lengthy consultation with the Television Match Official, the try was awarded.

Saracens, who lost to Toulon in the Heineken Cup final last weekend, had finished the regular season top of the table, nine points ahead of their opponents.

With so much at stake, it was perhaps understandable that the opening half was a tight, tense affair.

Northampton were unusually sloppy with their handling, while their poor kicking also invited pressure.

But it was at the breakdown where they were twice punished, Farrell making them pay with two penalties from range.

The England outside-half missed another shot at goal that would have given Sarries a nine-point advantage in an opening half-hour they edged.

Northampton, so dangerous this season with ball in hand, struggled to get their speedy backs into the game until Ken Pisi's scorching break from his own half sparked them into life.

He was eventually halted in the 22 when Sarries illegally prevented the ball coming loose.

Two penalties later, some fine breakdown work from the Saints forwards and superb handling by their three-quarters eventually saw Ken Pisi release Foden to dive over. 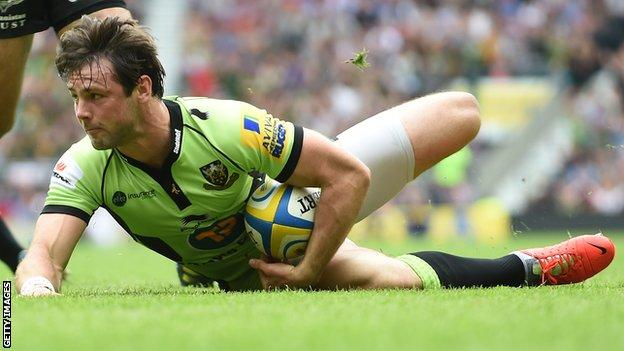 Saracens had territory to retake the lead as half-time approached, but they wasted those opportunities to trail by a point.

Farrell needed just four minutes to wipe out the lead, sending over his third penalty for a 9-7 lead.

Northampton should have had their second try of the game but Myler's pass to Luther Burrell was inaccurate, flying into touch after George North had created space with a powerful break.

But they did not have long to wait, George Pisi touching down in the corner after latching onto Myler's superb kick behind the Saracens defence.

Then came a moment of controversy when Farrell had a try chalked off as, after referee JP Doyle had awarded the score, the TMO highlighted a forward pass in the build-up.

Farrell injured himself as he kicked the ball into the crowd while celebrating, not only ending his afternoon but making him a doubt now for England's tour of New Zealand.

How they reached Twickenham

Intense Saracens pressure eventually paid off, though, as Bosch went over in the corner after a brilliant offload by Schalk Brits, but Hodgson's conversion hit the post and the scores were level at 14-14.

Sarries continued to press late in the 80 minutes, but Northampton held out and the game went into extra time.

Myler struck first, sending over a penalty which Hodgson cancelled out to leave it all-square heading into the second period.

Saracens went ahead this time through Hodgson's second penalty after Billy Vunipola's break was halted and Northampton were penalised.

But Saints threw everything at Sarries and Waller somehow managed to squeeze through a packed defence to touch down.

The grounding was not conclusive and the try was only awarded after the TMO took four minutes watching several replays.

Myler converted before being embraced by his team-mates as Sarries players slumped to the ground in disappointment.