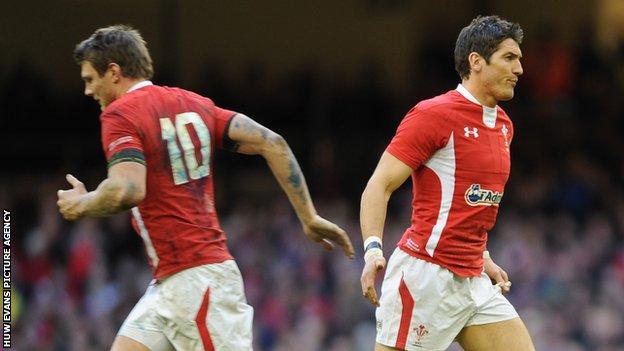 Wales' trial match will go ahead on Friday in Swansea without players at English clubs.

But all the France-based players are involved, apart from flanker Dan Lydiate who has a hamstring problem.

Ospreys stand-off Dan Biggar takes the 10 shirt for the Probables, with Perpignan's James Hook named at fly-half for the Possibles.

Scarlets wing Jordan Williams is the only uncapped player picked for the Probables starting XV.

He gets his chance in the absence of British and Irish Lions wing George North.

North will be in action for Northampton Saints on Saturday in the Aviva Premiership final against Saracens, while forward Ryan Jones will be in the Bristol squad for Wednesday's Championship play-off final against London Welsh.

But Gavin Henson and Paul James named in the original 52-man squad for the Wales trial, are also unable to take part at the Liberty Stadium despite their season having ended for their English clubs.

Leicester's Owen Williams, named in the original squad, has subsequently been banned for six weeks and will miss the summer tour while Rhys Gill is with Saracens preparing for Saturday's Premiership final against Northampton.

A spokesperson for Premier Rugby Limited, which represents England's Premiership clubs, said that because the game is not a Test match they do not have to release non-England players.

Evans packs down in the front-row alongside captain Matthew Rees and regional team-mate Rhodri Jones.

Jake Ball who made his international debut in the 2014 Six Nations, joins Lion Ian Evans in the second-row, whilst Andrew Coombs and Dan Baker feature alongside Jenkins in the back-row.

Pro12 top try-scorer Gareth Davies of the Scarlets partners Hook at half-back, with Steven Shingler and Cory Allen the midfield pair. Harry Robinson and Kristian Phillips are named on the wings, with Dan Fish at full-back.

"Friday is a huge opportunity for players and a chance for us to see them go up against each other for the Wales jersey," said Howley.

"It's something we haven't been able to do for the last decade, but it will be a big night for the players, we want to see them in a pressured environment and that's what we will get on Friday."

McBryde added: "It's been great to have the squad together, we only have a short time to prepare, but we are up for the challenge and excited by it.

"We have always said that the door is always open in international rugby and this is an opportunity that doesn't come round very often and the players know it's their chance to impress on a big public stage in front of all the coaches."

The trial match will help decide the final squad that Wales head coach Warren Gatland will take to South Africa in June.

Wales will play the Springboks in two Test matches - in Durban on 14 June and Nelspruit on 21 June - with a warm-up match against Eastern Province Kings in Port Elizabeth on 10 June.