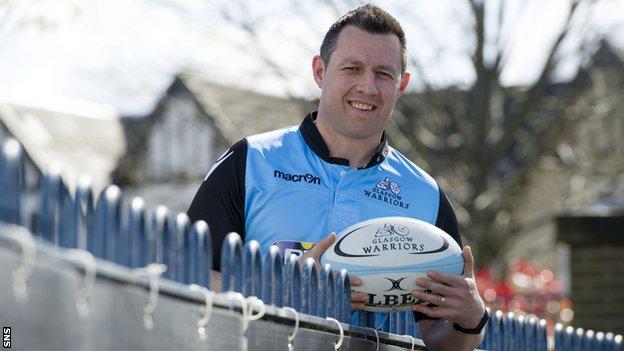 Reaching the Pro12 will be meaningless for Glasgow Warriors unless they beat Leinster in the final, according to assistant coach Matt Taylor.

Warriors, who finished second behind the Irish in the league table, are the first Scottish team to reach the play-off final, being played in Dublin.

"Everybody plays at this level to play in finals and win finals," said Taylor.

"But, for me, there's no use making a final unless you win it and that's the approach we'll be taking."

They've been in finals, they are a well-coached team and they've got a lot of history there, but we're a team that's up and coming and we feel we're in a pretty good space

Glasgow narrowly defeated Munster in their semi-final, taking advantage of their first-ever home tie at that stage to end a run of three last-four defeats.

Now they must take on the reigning champions in front of their own crowd, but Taylor believes Warriors can overcome the odds.

"It's always good to have your supporters there. But, in the end, it's a football field like any other place you play on.

"For us, if we just go there and execute our roles and we perform the strategy we want to do, we will put ourselves in a really good position.

Leinster will be hoping to not only win in front of their own fans but give Ireland centre Brian O'Driscoll a title-winning send off as the 35-year-old plays his last game before retiring.

"In terms of surprises, there may be a couple, but I think the coaches spend a lot of time watching these guys in training and it's horses for courses in terms of the strategy as well," explained Taylor.

"Our strategy might be slightly different than we had against Munster and that's why guys maybe drop in or drop out."

Glasgow gave Leinster a scare in Dublin in March before losing 28-25 and came out on top in a 12-6 win at Scotstoun in September.

"We've had some really close tussles with Leinster," he said. "It's a team we respect greatly.

"They've been in finals, they are a well-coached team and they've got a lot of history there, but we're a team that's up and coming and we feel we're in a pretty good space.

"We're not daunted at all by the challenge. We're all striving to get better and Leinster's probably been the best team in Europe for the last five, six, seven years, so we can't wait to play them."

Taylor thinks a Warriors victory would not only cement Glasgow's progress but give their Scotland squad representatives a boost ahead of the national side's summer travels abroad.