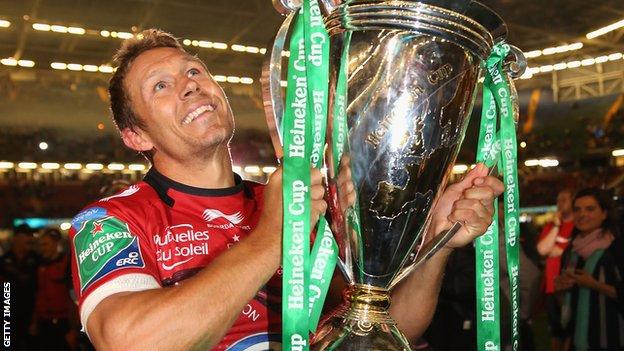 Former England fly-half Jonny Wilkinson insists he has made the right decision to retire, despite helping Toulon retain the Heineken Cup.

The World Cup winner, playing in Britain for the last time, kicked 13 points as the Top 14 side secured a 23-6 victory over Saracens in Cardiff.

"I don't feel I'm as effective, which is behind the decision," Wilkinson, who turned 35 on Sunday, told BBC Sport.

"It's important not to stand in the way of guys who are the future."

Wilkinson converted tries from Matt Giteau and Juan Smith, slotted home two penalties and also landed a right-footed drop-goal, bringing back memories of his heroics in the 2003 World Cup final against Australia.

The former Newcastle Falcons player will retire after next week's French Top 14 final against Castres, bringing an end to a career spanning 17 years.

And he said winning a second successive Heineken Cup was something he would "remember forever".

"It's such a good feeling, and I just want that to continue for as long as it can," said Wilkinson, who joined Toulon in 2009.

"But it will pass just like everything else and you move on to the next challenge. But what a journey it has been."

Wilkinson, who will join the Toulon coaching staff at the end of the season, said he was "proud and pleased" to be part of the club's success.

He added: "I feel like I have got lots of positive stuff to give, but I think that maybe needs to come from outside now and not from on the field.

"Jonny Wilkinson played well. His energy levels are the same as when I played with him 12 years ago. Incredible. He deserved all the plaudits the 60,000-plus inside the Millennium Stadium gave him."

Though Wilkinson drew much of the attention, countryman Steffon Armitage was named man of the match for a stellar performance including four turnovers.

But, like Wilkinson, the 28-year-old was quick to praise his team-mates.

"All the guys showed a lot of heart and it just shows that work-rate and playing for your team-mates helps a lot," he said.

Saracens director of rugby Mark McCall said he was proud of his team, who face Northampton in the Premiership final next weekend.

He added: "The second try was a bit of a killer. I thought our defence was good, but not on that occasion.

"Toulon were exceptional, and took every little chance that came their way. Hopefully we will be better for this. I trust this group to bounce back."