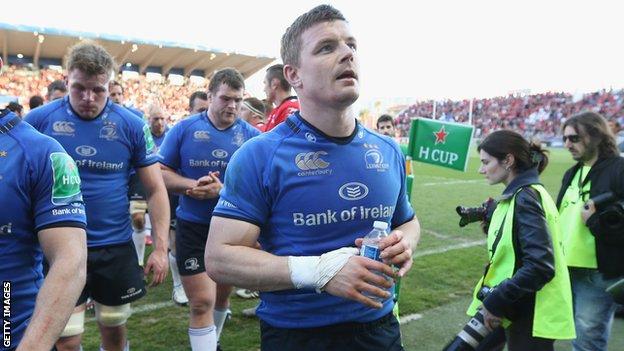 Warriors have reached the final for the first time, while O'Driscoll, 35, is bidding to win his fourth title in his final match before retiring.

"It's obviously going to be a very emotional time for him," 24-year-old flanker Fusaro told BBC Scotland.

"He's a very big threat in attack and defence."

However, Scotland cap Fusaro insists O'Driscoll, a veteran of 133 Tests and two successful Six Nations campaigns with Ireland, is only one of Leinster's danger men.

"In their semi-final win against Ulster, you could just see the patience they had.

"It took them until the 72nd minute to win the game, but they still achieved it and it's something they're very good at - closing out the close games."

Glasgow head coach Gregor Townsend emphasised the difficulty he had in choosing the line-up for the semi-final win over Munster.

And Fusaro, who expects a "massively physical game" thinks competition for places will be fierce again.

"I think everyone's back fit now, bar a couple of guys," he said. "So there's 40-45 guys training, all going for those 15 jerseys for the starting team.

"When it comes to these big games, it's about trying to keep your routine and everything as consistent as possible.

"We set out at the start of the season to achieve something that no Scottish club's ever done before and now we've got a massive chance to do that.

"It's just a great feeling to be in the final, but we really need to take the next step. It's a chance to make history.

"It's just an incredible opportunity and something we're all really looking forward to.

"Hopefully we'll have a good travelling support over there in Dublin."