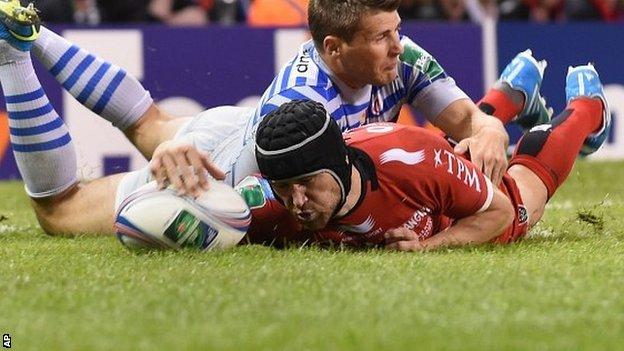 Jonny Wilkinson marked his last game on British soil by leading Toulon to back-to-back Heineken Cup crowns as they outclassed Saracens in Cardiff.

A first-half try from former Wallaby Matt Giteau and Wilkinson's drop-goal put the French giants 10-3 up at half-time after Owen Farrell's penalty.

He landed another on the resumption but Wilkinson, his predecessor as England fly-half, restored the advantage.

Juan Smith finished a fine move before another Wilkinson penalty sealed it.

The 2003 World Cup-winning hero, who kicked 13 points in all in his penultimate game before retirement, is now just one game away from crowning a remarkable career with the perfect ending, when Toulon go in search of a first French league title since 1992 in the Top 14 final next Saturday.

Regardless of what happens against Castres, he will go down in Toulon folklore for helping the club become only the third side, after Leicester in 2002 and Leinster in 2012, to successfully defend the Heineken Cup, one day before his 35th birthday.

Saracens, led by their own retiring captain Steve Borthwick, may rue their inability to crack open a resolute Toulon defence, in what was the last ever staging of the competition before it is replaced by the European Rugby Champions Cup next season.

Mark McCall's side still have the prospect of their own domestic title, when they face Northampton in next week's Premiership final, and they have made genuine progress over the past 12 months, after falling to the same opposition at the last-four stage a year ago.

Farrell landed a Sarries penalty for the only score in a first 20 minutes characterised more by eye-watering tackles than pulsating play.

Saracens survived a Toulon charge with gritty defending and mounted their own period of pressure, absorbing some massive hits in the process.

When Juan Martin Fernandez Lobbe was sin-binned for taking Alistair Hargreaves out in the air it seemed there might be a chance to capitalise, but it was the French side who emerged with the game's first try.

It was Australian made, with Giteau's chip through eluding Alex Goode and bouncing for Drew Mitchell, who fed the ball back to his on-rushing countryman for a simple finish, Wilkinson adding the extras.

Back up to full numbers, Toulon thundered forward from a catch-and-drive to create room for the left-footed Wilkinson to land a trademark drop-goal with his supposedly weaker right foot - the same one that won the World Cup 11 years ago.

A Saracens surge immediately after the break resulted in Farrell popping over a penalty, only for Wilkinson to land one of his own from just inside the London side's half.

And then the reigning champions stretched clear as Mathieu Bastareaud made yards and found Smith, who received the ball back from Fernandez Lobbe and crossed for a superb try that belied the lack of quality the game had possessed to that point.

Wilkinson, faultless from the tee all evening, converted and slotted over a penalty to put the gloss on Toulon's performance, before being replaced with two minutes remaining to a resounding roar of approval and chants of "Jonny, Jonny" in an emotional farewell to a British audience.